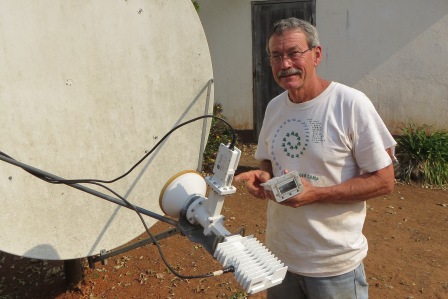 We arrived back to Gamboula on New Year’s Eve only to have the internet die on us on New Year’s Day!  I called up our friendly IT guy, Jorge, in Canada, and after describing the symptoms he made the diagnosis.  We needed a new LNB (Roy is holding the old dead one next to the one he installed). Ouch.  No store around the corner or delivery of online purchases out here in the bush.  Jorge had what we needed in stock – well, next best – he didn’t have the exact same LNB so he had to send a programmed modem also with a newer model LNB.  He couldn’t order anything quickly enough because he had to get the replacement part from Canada to our new friend Allison (we have yet to meet her but we are thankful for her!).  The Turks knew that she and her husband were heading for Yaounde on Friday from the states and gave us her contact info.  Now this was Monday that we were arranging shipment to her.  They arrived to Yaounde on Sunday night, picked up by Luke Turk, who then had to get the parts to the taximan who was bringing our friends, the Nestors, to Yaounde on Monday.  They arrived at 10pm after driving all day, and the taxi turned around and drove back to our little town across the border, where I was waiting!  We are so very thankful for all this amazing timing!   That Jorge had the parts, that Allison was coming so soon and was willing to bring them, that the Nestors were traveling to Yaounde that very next day which gave us a return trip opportunity.  This problem could’ve stretched on and on, but here I am writing to you about it, which means we are online!  Not to mention the fact that Roy and I were the nerd herd who replaced and reconnected everything (of course with directions from Jorge).  That could’ve spelled disaster, and actually there was a point when we were frustrated that it wasn’t working yet, and we tried rebooting a couple of times.  Then Roy said, “do you think we should connect this cable???” Thank you for your prayers!

As Covenant missionaries, we are working with all the tribal groups of the Central African Republic (CAR) but are trying to give special attention to the Fulani, a Musxlim, cattle herding, and semi-nomadic people group. We live on an experimental/training farm, near a mission station which has a hospital plus bible and nursing schools. We are establishing relationships with the local people groups through compassion ministries; Roy through agriculture and Aleta through public health and visitation, in order, ultimately, to share the good news of Jesus the Messiah with them. CAR is one of the least developed countries in the world and is currently in continual crisis (since the coup in March 2013), so reaching out in compassion is key to reaching their hearts. Due to the ongoing conflict and resultant ethnic cleansing in CAR, we are crossing the border to interact with our Fulani contacts.
View all posts by danforth →
This entry was posted in Fun, Prayer requests. Bookmark the permalink.