It was not supposed to be a literal break 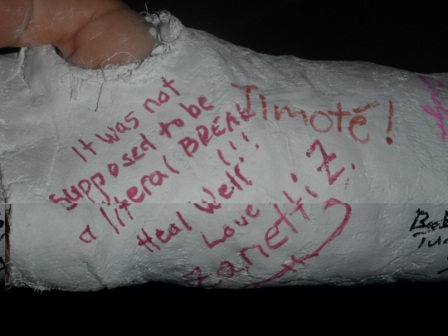 We were having a lovely vacation at Kribi, the beachtown on the Atlantic coast, 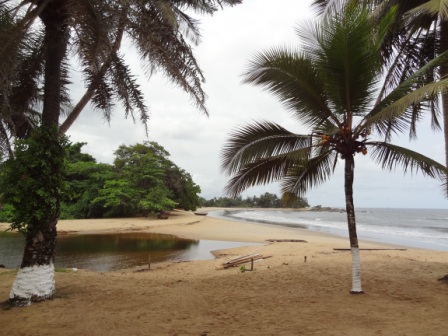 enjoying a break from the usual AND the unusual tensions of Gamboula.  We were out on a walk with friends to see the waterfalls 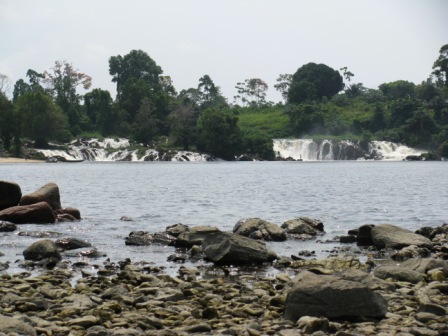 when I slipped and fell on rocks and broke my right arm.  My adventure at the local hospital was a tough one, and we ended up having to cut into the cast to relieve the pressure before getting a new one in Yaounde 2 days later. 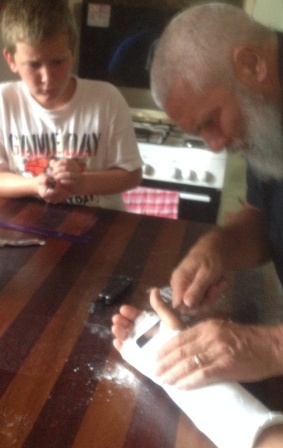 To add traumatic insult to injury, we were awakened early Thursday morning in our hotel room to the sound of sledgehammers and loud voices.  They pounded and yelled at our door – come to find out, there was a crowd of men and one very nicely dressed lady creating the ruckus.  She presented herself as a justice of some sort and she told us in very demanding, very unfriendly, and very fast French that we needed to vacate the premises immediately. Not exactly your normal hotel wakeup call!  Imagine trying to get dressed, with a cast on a newly broken arm, while people keep pounding on the walls and door!   In the confusion of crazily packing up our stuff and having men all around us, in our room, saying, “Hurry up! hurry up!” our computer case went missing. Roy went racing around looking for it and someone handed it to him from underneath a coconut tree, but we sadly discovered that there were three very important items missing from the case; our iPhone, external drive, and camera. I wish we had a picture of the hotel courtyard and parking lot, piled high with beds, fridges, computers, chairs, tables, cases of bottles…all soon to be drenched by a sudden downpour. We came to understand that the whole confusion took place because of a land dispute between the hotel owner and the next-door neighbor. The neighbor had sent the justice and her team of thugs to destroy the hotel buildings on an early morning surprise attack.  They had emptied all the rooms except ours, and had a bulldozer ready to demolish the hotel.  We think that the delay we caused (they were surprised to find us there) allowed the owner and the police to arrive and stop the attack. We spent the whole morning watching the arguments and giving interviews and filing police reports. We then decided to give up on our little “restful” vacation break at beautiful Kribi and head for Yaounde.  Our friends have been so loving and kind, from colleagues right with us here, to our Covenant mission leaders in France and Chicago.

So please be patient when we don’t answer your emails right away! I actually am dictating this into Timothy’s iPhone and getting the text by email needing only to edit rather than type the whole text one handed!  Pretty wonderful! 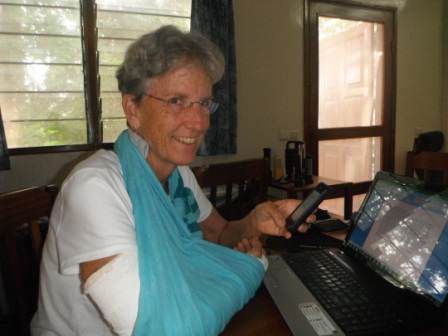 Thanks for your prayers – for our processing of these recent events; for emotional and physical healing.