About the Fulani, an good overview by Angsthelm

I shared this article on Facebook, in French, and I think it gives a fair overview.  The picture is also from Angsthelm.  Please keep praying for the Fulani!

Fulani Mbororo, simple cattleherders, often not even owners of cattle but hired herders, have been the target of various successive attacks for more than twenty years. With each change, the new authorities would accuse them of being in the pay of the former, and then they suffered retaliation, fines, illegal taxes, and cattle theft. Their situation is even worse today in this country where ‘Muslim foreigners ‘ are hunted. The Fulani in the west of the country have fled mass massacres, rape, and looting. 60,000 sought refuge in Cameroon, and 40,000 in Chad, mingling with the thousands of other Muslims who have fled the country. Some communities remain trapped and live encircled by the anti-balaka.

Certainly, a minority of Fulani participated in rebellions: 350 of them have followed Baba Laddé, leader of a movement in rebellion against president Déby then joined the Seleka in 2013. But do not confuse the African Fulani with roadblockers and many poachers in this country, and especially with other Fulani mercenaries from Chad, Sudan, Nigeria, Niger who fight alongside the Seleka. Nomadic groups very dangerous, armed and vindictive, come also each year from Chad and Sudan for long transhumance. All these are not the African Fulani. Even if some of them are now in the political structures and command of the Seleka (a spokesperson, a leader of military operation) it is some centaiines people in a community of about 750,000 people.

Last February, the Association for integration and social development of the Fulani of Central Africa (AIDSPC), partner of the CCFD-Terre, appealed unsuccessfully to the international community for the many refugees who do not benefit from international assistance. The AIDSPC officials continue to seek emergency aid but also the return in their full citizenship and justice for the abuses committed against their community. They hope that the Central African Government and the United Nations take into account the right of their community to return to its country. The issue is important. If the Peul communities, refugees, and those that still lie in the East of the country, receive no signals indicating that their situation is taken into account, the risk is great that many of them joined the rebellion and engage this community in a conflict without end. It is urgent in contrast to associate the Fulani reconciliation process and to make them allies in the interest of a reunited Central Africa. 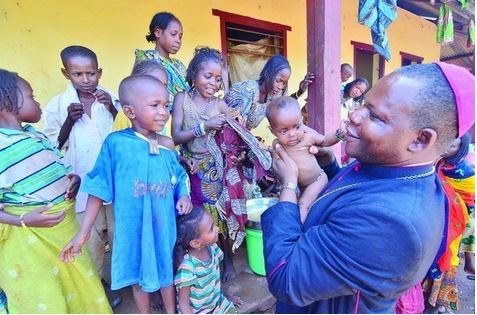 As Covenant missionaries, we are working with all the tribal groups of the Central African Republic (CAR) but are trying to give special attention to the Fulani, a Musxlim, cattle herding, and semi-nomadic people group. We live on an experimental/training farm, near a mission station which has a hospital plus bible and nursing schools. We are establishing relationships with the local people groups through compassion ministries; Roy through agriculture and Aleta through public health and visitation, in order, ultimately, to share the good news of Jesus the Messiah with them. CAR is one of the least developed countries in the world and is currently in continual crisis (since the coup in March 2013), so reaching out in compassion is key to reaching their hearts. Due to the ongoing conflict and resultant ethnic cleansing in CAR, we are crossing the border to interact with our Fulani contacts.
View all posts by danforth →
This entry was posted in Fulani/M friends, Prayer requests. Bookmark the permalink.