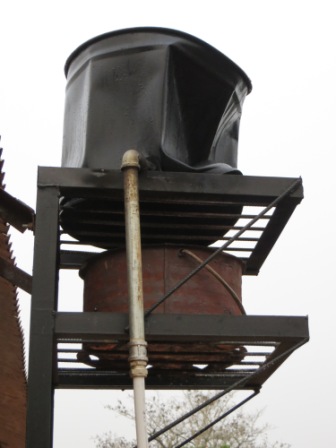 Do you want to know what NOT to do when you set up a hot water system like ours?  It’s been working well up until now.  It is gravity powered because it sits up near the eaves.  It is not dependent on any outside power system because it has a charcoal brazier under it that gets the water as hot as we like it each day.  Well, that sentence wasn’t exactly the truth – we’ve had some cold showers on rainy days because we haven’t planned ahead with heating the water in the late morning.   Usually, because we live in the tropics, a cool shower actually feels good, especially for a certain age of women like me.  But we goofed.  We sealed the lid on the little metal water barrel with its ring, so that it wouldn’t blow off in the wind.  And we do have big winds sometimes.  What we didn’t prepare for was the PRESSURE!!!   One day, the fire was too hot and the water was too low, and boy, how that thing imploded and blew its lid!   We now have a new little barrel, with a lid and a ring, but we have a hole drilled in the lid.  When we fill the barrel, it lets us know that it’s full by shooting a stream up in the air like old faithful.   Live and learn.