A week ago Friday was our local church’s official day for prayer for and celebration of women.  Last Friday was March 8, International Women’s Day, and there was a small parade downtown, lots of individual parties and prayer, and many women had outfits made out of this year’s material (every year it’s a new design, the fabric being made available in local shops).  This photo is courtesy of Janet Ziegelbaur (thanks, Janet! I didn’t get any pix that day!): 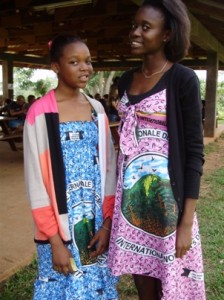 Then, yesterday, the local women’s group had their “awards” ceremony.  The women newly joined to the group, mostly the wives of the bible school and nursing school students, were officially presented and gave their promise to be women who speak the truth, the Word, with their whole being. 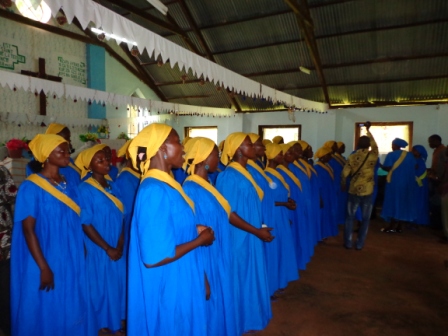 They received ribbons to add to their sashes, signifying different achievements, including even basic counting but also things such as reading and verse memorization.  The crowd would crow and cheer and individuals would come up and spray perfume all over everyone.  After their promise and the presentations, they were blessed and prayed over. 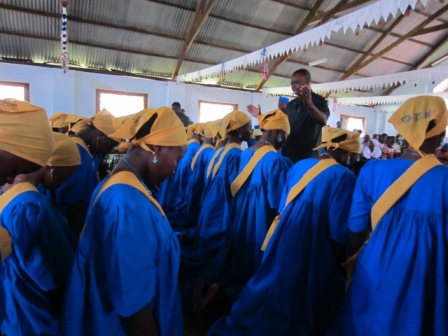 Then all the guests and family greeted each one!  An exuberant celebration of these women!  Notice how to greet a person, below, should you ever find yourself in need of such info.  You shake hands, and you bump forehead corners (particularly if you’re a guy) or cheeks, once on the right, twice on the left, while speaking words of blessing and encouragement. 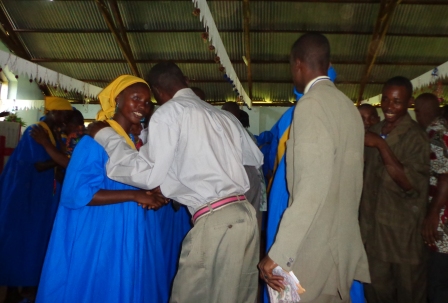 I have to say, though, the most significant part of the ceremony for me was the sermon at the end.  A dear friend and elder of the church, Gabriel, shared his heart about the treatment of women.  He spoke out against abuse and demeaning behavior, and especially the all too prevalent custom of women being little better than beasts of burden.  I was blessed by his words and am hopeful that men and women both were listening.

As Covenant missionaries, we are working with all the tribal groups of the Central African Republic (CAR) but are trying to give special attention to the Fulani, a Musxlim, cattle herding, and semi-nomadic people group. We live on an experimental/training farm, near a mission station which has a hospital plus bible and nursing schools. We are establishing relationships with the local people groups through compassion ministries; Roy through agriculture and Aleta through public health and visitation, in order, ultimately, to share the good news of Jesus the Messiah with them. CAR is one of the least developed countries in the world and is currently in continual crisis (since the coup in March 2013), so reaching out in compassion is key to reaching their hearts. Due to the ongoing conflict and resultant ethnic cleansing in CAR, we are crossing the border to interact with our Fulani contacts.
View all posts by danforth →
This entry was posted in Ceremonies & church happenings, Mission. Bookmark the permalink.