So, Lori and I went down to see tiny 2 month old Hammadou, and we are so encouraged by his weight gain and we thank you for your prayers for him!  He came in weighing around 1.350 kg/3lbs. and now, after encouraging his mom in her nursing (she keeps at it even though she just isn’t a big milk producer) and in bottle feeding him formula, he is weighing in at a big 2.170 kg./almost 4 lbs! 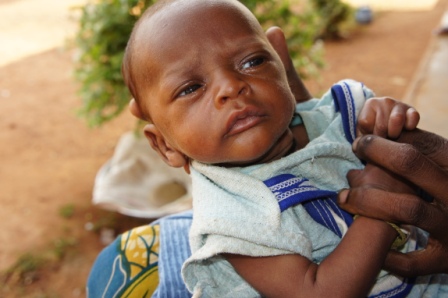 So, we walked on into the hospital and met up with Bernard Bekosso, a dear friend and hyper space cadet – in other words, he doesn’t ever sit still for long!  He and his wife live in a village to the north of us and they have been so very successful in interacting with the Fulani.  Though they are of another tribe, the Fulani there trust them to the max.  He is a tailor by trade, a tree planter and gardener by “hobby” or lifestyle, and an evangelist at heart.  His wife and he have been sharing the love of God and the good news of the Messiah in their village for years.  Recently they have been up against a heavy problem, their youngest child has epilepsy.  They have given him meds specifically for the disease at our hospital, but they didn’t help, at least not sufficiently to satisfy the Bekossos.  They have given him so many different traditional meds – leaves, seeds, potions, & ointments, you can’t imagine the time and money involved.  They have had prayer and prayer and more prayer, by different friends and pastors and family, all to no avail.  When we saw Bernard, he told us that his son was back in the hospital, and that they had almost lost him the previous day.  He is on the mend, with meds at our hospital, but he is still not in great shape. 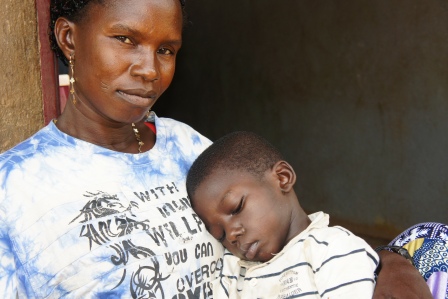 Sidoni (Mrs. Bekosso, pictured above) told us about some other news.  A close friend from her village, a Fulani woman, wife of a prominent Fulani teacher  there, had just passed away.  This 45 year old woman had had congestive heart failure, and had spent many weeks at our hospital. Sidoni had been there, had actually been holding her up in her arms as she died.  Normally, Fulani and other tribes just don’t mix together like that.  They greet each other, they are civil, but they don’t normally interact in the heart places in their lives.  Sidoni and Bekosso have broken that barrier.  Sidoni is absolutely sure that this woman had deep faith in the Messiah, though she continued in the usual outward practices of a devoted Musxlim.

So, join us, would you, in thanks to the Lord?  We are so thankful for Hammadou’s weight gain, for the Bekossos’ lives and witness among the Fulani, for medicines that have helped their son on the road to recovery, for the faith of a dear friend who has passed into a better place.