The Central African Republic’s Independence Day is December 1st, but due to circumstances surrounding the visit of the nation’s president to a town a day’s drive from us, our celebration at Gamboula was postponed until December 15th.  The parade was a bit toned down compared to past years’ festivities, but the pomp and circumstance surrounding the local government officials was there in full force.  The soldiers presented themselves and all the lesser dignitaries shook the governor’s hand, the flag was raised to the chorus of the national anthem, there were speeches, and then the parade began.  The children were fun to watch, as they marched in time to a bugle and drums, delighted to represent each of their schools.  There were little girls dancing with hoops and a group of karate practicing boys and a funny group of actually kind of scary looking clowns.  There were no floats or flowers or marching bands, but it was very typical for here and entertaining.

Lined up to shake hands with the regional governor

The regional governor and the mayor

Kindergartners waiting their turn to march 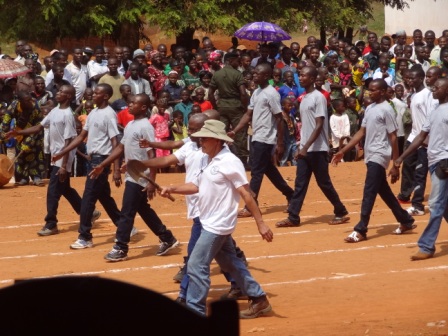 Roy and Benoit and the CEFA/ag crew 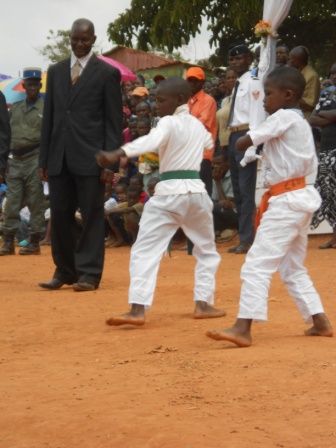 After the parade we went to a meal in a dark, loud music filled bar.  It was difficult to even carry on a conversation with the person right next to you.  We waited for almost 3 hours, but the food was quite good and I have to admit it was fun to people watch.