So you need to replace an iPod wire?

Okay, while your windshield was being replaced, your iPod wire to the car speakers went missing. You want to replace it, and you know of a missionary buddy from Yaounde who is in the states for 3 weeks. Perfect! You ask him to buy a replacement wire (because IF you could find one in Yaounde, it would probably be 3 times the price) and bring it with him on his return to Yaounde. He arrives Friday night, and there happens to be a mission airplane flight to your station in the bush on Monday! BUT, he misses being able to get the wire to the pilot, so you call a taxi driver friend to go pick up the wire at the friend’s house at 6am Monday morning and get it out to the mission aviation hangar before the pilot takes off at 6:30am. The pilot gets it, and off he goes. He’s flying to Bangui (over 3.5 hours in a single prop 5 passenger Cessna) to pick up some missionary kids returning to boarding school, and from there plans to go to another remote mission station for one more student before landing at your place to pick up the last kid, Benny Turk. BUT, the pilot gets almost to Bangui and finds out he doesn’t have a current permit to land, and he has to fly all the way back to Yaounde, giving him over 7 hours straight flying the plane with no break. If he had landed anywhere within our country, he would’ve been liable for a $4,000 penalty fee. He tries again on Wednesday, and in spite of a rainstorm and a 3 hour wait in the capital while the prez was travelling, he makes it to your bush station. By now it’s too late in the afternoon for him to continue on home with the 4 kids, so they stay the night, after tying down the plane and arranging for a night watchman. The kids have by now missed the first 3 days of school, so they’ll have some catching up to do. So, take a moment and be thankful for the store down the road from your house, for the school right there in your neighborhood, and for amazingly convenient transportation. 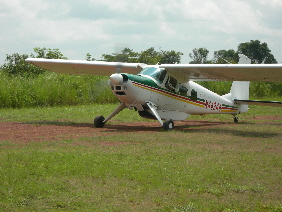 As Covenant missionaries, we are working with all the tribal groups of the Central African Republic (CAR) but are trying to give special attention to the Fulani, a Musxlim, cattle herding, and semi-nomadic people group. We live on an experimental/training farm, near a mission station which has a hospital plus bible and nursing schools. We are establishing relationships with the local people groups through compassion ministries; Roy through agriculture and Aleta through public health and visitation, in order, ultimately, to share the good news of Jesus the Messiah with them. CAR is one of the least developed countries in the world and is currently in continual crisis (since the coup in March 2013), so reaching out in compassion is key to reaching their hearts. Due to the ongoing conflict and resultant ethnic cleansing in CAR, we are crossing the border to interact with our Fulani contacts.
View all posts by danforth →
This entry was posted in Fun, Transportation. Bookmark the permalink.