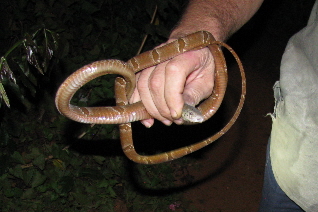 There we were, enjoying ourselves, and the movie for the little kids had just finished. We heard Bobby call from the front porch, “Papa, I see a snake!”. We all rushed out into the dark, armed with flashlights and two walking sticks. Most of stayed quite a distance back, but Luke, the mega snake enthusiast, plowed right in, and Roy, the minor snake enthusiast, who is always willing to help but is more careful, were each one on each side of the sunshade covered in flowering vine where the snake was spotted. Luke proceeded to knock the snake out of the vine while saying, “definitely dangerous, poisonous” or some such words to that effect. He asked for a small stick, because for some insane reason that’s beyond me, he wanted to pry open its mouth to see its fangs. Maybe to give him a clue to identify it? Leanne, Luke’s wife, kept saying, “Be careful!” The snake is now dead, and thankfully nobody was hurt. That’s enough excitement for this Grandma for a little while!