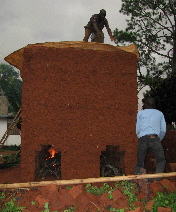 The beginning of the dry season has normally started by now, but this year has been a weird one all ’round for weather. These brickmakers were counting on the weather being dry, but instead they are hurriedly putting a tarp on top of their tower of bricks, because the bricks will melt in heavy rain. They stack the bricks carefully with spaces between to allow the heat good overall brick contact, and then with a coat of mud on the outside to keep the heat in. You will note their brick edifice has fires going inside, and I was wondering how soon the tarp would melt if the rain didn’t stop quickly. The man with the light blue shirt is in process of throwing bricks up to the guy on top to anchor the tarp so it won’t blow away in the wind. It turned out to be a quick shower, so they were able to take the tarp off and fully cook the bricks. Apparently this batch is blackened more than the previous ones, maybe because of the tarp at the beginning. These men have now made a total of about 14,000 bricks for Roy for building out at the CEFA (ag) land (wherever that is going to be). I am thankful that their work is coming to a close, as their work area is right next to our house and we have been “enjoying” the smoke from the burnings.