how are you feeling this week? – a view from the center of the world.

“How are you feeling this week?”

“A heaviness and sadness.”

“In disbelief and trying to find hope.”

Thus began our retreat with 8 pastors who are being trained in mentorship to support and invest in younger pastors, church planters, and their families. These pastors have seen a lot, have experienced the ups and downs of life, and are extremely wise.

Their expressions of heaviness and burden were not about their perspective communities, which each holds a large amount of marginalization and hurt, but they were referring to what had happened early Wednesday morning in the United States of America.

They were even more stunned when we had to admit to them that the people who put Trump in office are supposedly brothers and sisters in Christ, White Evangelicals. Draw-dropping, silent, and even more confused than before.

This was but one meeting of many, one attempt to explain of a dozen more that will take place. Our call as ambassadors for Christ and the church just got even more complicated than it already is. And the fastest growing areas of Christianity- Africa, Asia, and Latin America- will be completely baffled by the mixed messages they receive from their kin in the North. Do they love us or hate us? And we will have to try to attempt to answer such a complicated question. 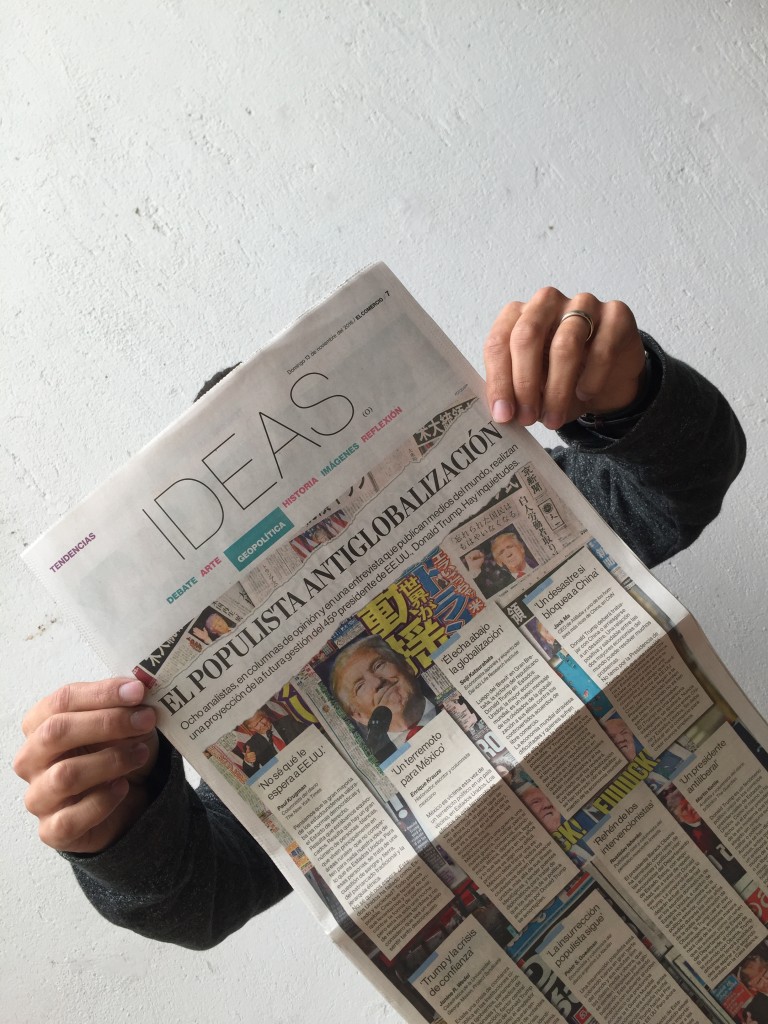 We know you who read this blog come from a variety of backgrounds, leanings, and points of view. Some of us are White Evangelicals, many of us are not. Some of us identify as Christian, some of us would not, or at least not Evangelical. Some of us have voted Democrat since we were 18, others voted Democrat for the first time in our lives, others Independent because we couldn’t bring ourselves to vote either way, some of us abstained for similar reasons, and some of us voted for President-elect Donald Trump, and some of us simply had to watch. That’s a lot of feelings, ideas, and understandings.

We want to be civil, we hope to be understanding, and we want to be honest of how this reality is seen by much of the world, but especially amongst those we work with here.  We know it is complex, we know it was a surprise; we know there is a lot of fear and anger on all (because there is more than simply two) sides to this election.

But first we need to confess as missionaries and ministers it is our role to build bridges between people of diverse cultures and worldviews to build “a more caring and just world.” We confess we have not done our utmost or best to build that vision that God has for the world. We have let opportunities to slip, spoken up too little or too late. We have not shared the joy we have within our diverse community with those who do not have as much access to such diversity. We have failed in our call as teachers and intercultural ministers to prepare others for the world in which we live. A world of a multitude of faiths and cultures connected in an unprecedented way. We see that as an opportunity and full of possibilities, but we have not demonstrated that sufficiently to those who fear this connectivity and expansiveness of the global village. At a conference for the North Amerincan Institute for Indigenous Theological Studies, Andrea Lee Smith enjoined us to, “Make the diverse and alternative community so attractive and joyous people will have to ask what it is all about. That’s what the early church did.” We feel perhaps we have not shared our joy enough.

One of the highlights of my (Chris’) seminary career was not a class but the opportunity to represent my culture (Anglo-/Dutch-/Polish- American) and institution (North Park Theological Seminary) as a student consultant to the Association of Theological Schools (ATS).  I was called to Pittsburg along with a couple hundred other students from divinity schools and seminaries. We were consultants to CORE- the Committee on Race and Ethnicity – for a specific project known simply for a date, 2040 (http://www.ats.edu/resources/preparing-2040-strategic-plan-sample). That is the projected year that the United States will no longer have a majority ethnic group, that it will be statistically inaccurate to assume an American is a White Protestant, Catholic or Jew. The other reality discussed was that the church has already changed. The fastest growing part of both Catholic and Protestant churches is in non-White demographics.

So the main purpose of this consultation was to ask: are seminaries and divinity schools representative of this reality; are these schools preparing men and women to serve in such communities, especially in communities different from their own upbringing? Is the Filipino priest able to serve well in a White parish in Phoenix, or the Chinese-American minister from an urban center able to preach well to a primarily rural African-American community, etc.?  As might be expected student answers were varied, some encouraging and some discouraging. Through the weekend though it was full of joy, tears, lament, hope, and encouragement. Overall it was a weekend when we felt together and unified in purpose and call. We were Pentecostals, Catholics, Orthodox, Anglican and Episcopalian, Methodist, Baptist, the broad spectrum of Evangelical traditions, Mennonite, and Unitarians, just to name a few. Obviously we were very different in tradition and ethnicity but we were together, and we were able to pray, listen, share, sing, plan, and work for a future we were excited about. We left with many questions, with acknowledging there was still so much to do, but encouraged. Jesus’ prayer for our unity in John 17 seemed to be resonating throughout our well-wishes and farewells. But perhaps a crucial question we need to focus on, or haven’t enough is: are we preparing our communities in which we serve for 2040?

What’s interesting is such a reality is an asset. Educational studies have proven that children who study in a diverse environment excel in both academic, physical and social standards (http://www.pearsoned.com/education-blog/diversity-in-schools-improves-learning-outcomes/).  Both Harvard and MIT have proven that those who are outliers, people who are able to adjust and move within a variety of social and cultural circles or have special abilities, such as Autism, are better equipped to excel in business and are irreplaceable employees to corporations and the market (https://hbr.org/2014/01/the-case-for-hiring-outlier-employees.)

By bringing out the best in people who think differently, you position your company for greater advantage. That’s because innovation, which is a critical skill for businesses today, is driven by diversity of thought. When you can’t foresee the biggest opportunities and problems coming your way, then your people assets must provide your company with the ability to adapt. This ability arises from employees who see things from new perspectives—people from different backgrounds, and those with different cognitive, developmental, and neurological endowments.

But perhaps even more importantly it is also simply about human dignity, not only mutual benefit. All humans are created in the image of God (Genesis 1.27). Human dignity has long been a part of 19th and the first half of 20th century Christian social engagement: Education for all, suffrage, temperance and protection of children, abolition, and colonial independence. Now of course the church has a mixed record in all those areas, but it was very much a part of our identity. That comes because much of the Hebrew and New Testament Scriptures are devoted to combating homogeneity, xenophobia, and misogyny. Now I will readily admit we have not as a religious community practiced such a struggle as we should have, but it is what we are called to. When we examine Genesis 11 and the tower of Babel, God’s refusal to approve of a homogeneous group to build an empire stands for us today- “Go and multiply like a told you to. Create different language and expression. Don’t sit around here trying to build a tower to ‘make a name for ourselves’, excluding those who are not a part of this mono-cultural mess.” The Deuteronomic code written by Moses was, as far as we know, one of the few Ancient codes to include rights for women, children, and the foreigner (Ex. 23.12; Deut. 10.17-19; 16.18-20; Nums. 30; Mal. 3.5; Ps. 68.5-6). On their return from exile Isaiah lets the people know that the sexually maligned and foreigners are deemed “more than children of God” and “will never be forgotten” (56). What if James and the first church council had refused to listen to the Spirit and Peter’s testimony that indeed the Gentiles, Romans no less, had received the blessing of repentance (Acts 10)?  What if Peter and John ignored Mary’s Gospel announcement simply because she was a women? We wouldn’t exist as a church. Xenophobia and patriarchy would have prevailed and who knows where many of us would be spiritually and culturally.

That call continues for us today. We cannot give in to suspicion of “a lack of patriotism” or lack of dedication to the “forgotten man and women.” We must be ever vigilant and committed to one another. We must not give in to anger and fear- the number one expression during exit polls. Rather we must cling to the virtues we have been called to: hope, trust, gentleness, justice, and courage; the loving of our neighbor. If you voted Republican remember your muteness stands as a silent nod of approval. As the KKK rallies in North Carolina in celebration and Trump announces one of his chief advisors will be a well known anti-Semite and abuser it is an opportunity to communicate. It can be an opportunity either to communicate that Republicans are for the same values as those extremists in their midst or it can be a chance to communicate they do not represent the broader constituency. It is imperative. The rest of us are often written off as liberals, or naïve, or progressives, or idealistic, or hippies, or faithless, or only out to benefit our racial kind. We will continue to struggle against such extremism but we must do it together. If you are a White Evangelical we must tell you that we are losing our witness to the broader world- with our lips we say we love the world and work for its salvation, but many have watched and wondered as our actions and our supposed representative makes other claims.

There is a saying here that has entered modern thought, “if the United States has a cold, Ecuador catches pneumonia.” If we view our current state of division and anger as a disease, we have a better chance of healing our land. For a long time we have ignored the gapping and hemorrhaging wounds of racism, jingoism, fear, a rape-culture, and pluralistic confusion with small band-aids. In reality we need some intensive care and therapy. It is with that in mind we offer Marty Haugen’s Hymn A Healer of Our Every Ill,

Healer of our ev’ry ill,

light of each tomorrow,

give us peace beyond our fear,

and hope beyond our sorrow.

You who know our fears and sadness,

grace us with your peace and gladness,

Spirit of all comfort,

In the pain and joy beholding

how your grace is still unfolding,

give us all your vision,

Give us strength to love each other,

Spirit of all kindness,

You who know each thought and feeling,

teach us all your way of healing.