Two months have passed since we arrived to Ecuador and we continue to settle in, acclimating once again to culture and altitude. As with any move to a new place one is faced with not only finding some common ground to hold onto for stability but also the differences. These differences are actually some of the greatest gifts of cross-cultural ministry. With a new set of ideals and ideas we can step back and examine our own culture and ask new questions and be confronted with our blind acceptance of certain attitudes and norms. That’s why God sends, so that we learn from one another.

I was confronted with one of these particular differences a few weeks ago. News from the United States came in about more violence and I was thinking about the father selling CDs, Alton Sterling, who was killed. That same evening I was watching our local channel here, TeleAmazonas. The newscaster began her special report on employment in Ecuador, where unemployment is on the rise. But I focused on another aspect she reported on, that in addition to the unemployed there are five million Ecuadorians who are ‘informally employed.’ Informally employed people are seen everywhere here. Those informally employed work at nearly every stoplight hawking cell-phone chargers, towels, fruit-of-the-season, or yogurt. They get on the bus walking up and down selling empanadas. My new favorite trend is seeing men in chefs’ hats trying to sell bake-at-home pizzas…I haven’t tried those.

Something struck me about this report while I was also thinking about that man in Louisiana, or Eric Garner in New York selling cigarettes before he was strangled. What struck me was our perceptions of survival techniques. Informal employment is that, a survival technique. When there are no jobs to be had in the community or you aren’t hired for one reason or another many turn to informal employment to survive. But in the United States informal employment has a very different connotation than here. In the US we call it ‘hustling.’ To hustle has various perceptions, sometimes we applaud it in sports arenas, dance-floors, or when someone is trying to supplement their regular income. I remember when every middle-aged suburban mom in the mid-nineties became a Beanie Baby hustler on eBay. Now if you had placed those women on the corner of an urban center, they would have been viewed very differently. Our perceptions change based on the person hustling and where they hustle. The reality is, for many people it is one of the few options for survival.

Last week we had a pastoring couple in our home for a meal and conversation, a place for them to unwind and to reconnect our friendship after years apart. The pastor commented that in the congregation we are a part of here, the biggest and often only thing our fellow congregants are concerned about is “obtener dinero;” making money. Not making money for a better house or brighter future, but making money for survival. Most of our neighbors are one small calamity away from extreme poverty. Many work multiple informal jobs in order to provide. So how do we view those who work informally? How do we perceive the poor? As people? As statistics?  What are our attitudes towards survival methods?

In development theory we talk about the ‘feminization of poverty,’ the hard reality that women and children experience the effects of poverty at disproportionate rates. We also note the ‘racialization of poverty,’ which is nearly universal that the darker you are, the more likely you experience poverty. But I think in some cultures we also have an issue with the criminalization of poverty. We are uncomfortable with poverty, as we should be. We don’t know what to do with guilt or the complexities of economics and systems. We don’t want to see it, so we try to remove those who face it.

So when we are confronted with social inequalities some Christians become extremely uncomfortable. In some circles ‘social justice’ has become a dirty word. Essentially one’s faith is questioned for believing in the Sermon on the Mount. We used to not have an issue with it. Most Evangelical churches came out of a tradition with a desire for social change, especially with populations experiencing poverty. It was called ‘pursuing the Common Good.’ Today though, some rhetoric seems to be an inverse of the parable about the shepherd looking for the single lost sheep. We are so concerned about the one freeloader we are willing to sacrifice the ninety-nine.

Attitudes about poverty amongst many in Ecuador are a bit different. Middle-class folks reflect a certain social responsibility to employ or render services from as many as possible. For example, in the mornings many informal orange juice stands pop-up in intersections. Now most people driving in a car on their way to the office can afford to buy a carton of orange juice and drink it at home. But there is a sense that you should purchase the dollar-worth of fresh-squeezed orange juice from the person on the street. It is going to help them survive the week. Or a young man might come up to your car and begin washing the front window, one might be tempted to yell, ‘I have washer fluid buddy!’ But for some small change, thousands of cars have their windows wiped by these men. It is a very different attitude towards supporting one another than a DIY culture we have come from. I could squeeze my own orange juice in the morning to take to work…I have an orange tree in our yard. However, that would be counter to economics of social responsibility here. To do-it-yourself is seen as miserly and greedy. 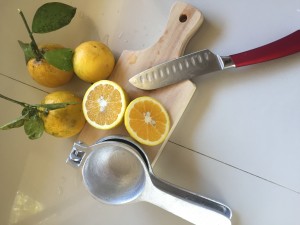 Of course here in Ecuador there are prejudices, paternalism and injustices as in any nation when it comes to poverty and those experiencing it. However, the practice and the way we interact and perceive those informally employed, the five million hustlers, one-third of the population, is a bit different. As people of faith we hope for a transformed world, a just world. While the church works towards long-term, sustainable transformation, people still need to survive the day. So we look for transformed societies and abundant life, but also listen carefully to the response John the Baptist gave. In Luke 3.11, repentance, turning to God is made practical in that, ‘whoever has two tunics should share with anyone who has none, and whoever has food should do the same.’ May we recover a sense of the common good in each of our societies and be mindful of the way we perceive the hustler.