I am a person of the little things.  It is often the small details of mundane, daily, normal life that really excite me and in them I tend to find beauty and meaning and purpose.

I’m married to a man who is a big picture thinker.  I am so glad that he is. We can balance each other out a little bit.  He challenges me to think about systems and to step back and take the long view.  And I can remind him that sometimes what is needed in this moment is to just do the next thing; to be faithful in whatever is the small and seemingly unimportant next step.

God shows up for me in the details.  Yes, God is one who also moves mountains. But more often for me, God speaks in the still, small voice.  It is the small glimpses of God and this upside down Kingdom that we are invited to be a part of that grab my attention and make me feel seen and loved and known by the Creator of the universe.  And this year of raising support has been filled full of these fleeting moments and divine coincidences for me.

Like the day we sent out our first round of mailings to start fundraising.  We had spent weeks writing and designing and printing and rewriting and reprinting.  And then came the folding and stuffing and envelope -licking and stamping.  On a Thursday morning in late March, I filled a brown paper bag full of these letters with hope and anticipation and nervousness about the journey about to begin.  I dropped both my kids off at school and headed to the nearest mailbox down the street.  As I was walking, I was thinking to myself about how I wished that Chris, who had worked the night shift at the hospital the night before,  was with me.  Since I am a detail person, it felt like launching this huge season of raising support was something that we should be doing together.  But the “check-things-off-my-to-do-list” part of me won out and down the street I went to drop the letters in the mail and get on with my day.  But as I approached the mailbox, who should be crossing the street, but my shaggy haired husband who had decided to run a quick errand before coming home after his shift at the hospital.  An errand that took him out of his way from home, but right into my path and we dropped those letters in the box and started this chapter of the journey – together.

Or there was that day that was at the end of a very long week.  A week for me that had been filled with doubt and fears and questions about what we were doing.  Uncertainty and insecurities were high and to top it off, we had just heard some devastating news from a friend.  I spent the afternoon trying to work, but mostly being distracted and weighed down.  Then the mail showed up and in the mail was a small, manilla envelope from an address I didn’t recognize.  Opening the package, I found a map of Ecuador that had messages of encouragement and promises of God scrawled out in the handwriting of little kids who months before had learned about what God is doing in Ecuador through the church and had prayed for our family.  A note from a VBS leader said that she had meant to mail it to us months before, and she apologized that it had been buried on her desk.  I read those sweet notes through tears knowing that each word was meant for me on that very afternoon.

And the times that we have been prayed for by people in this past year.  These people who don’t really know us at all and yet the words that they have spoken have been the exact thing needed.  They put words to emotions and feelings we had that we had been unable to express.  They prayed for things we needed that we didn’t even know we needed until that moment.

And there have been countless other moments.  And now there is this.  Last March I posted this photo and we made it Facebook official (because that is when things actually become real, right?) : 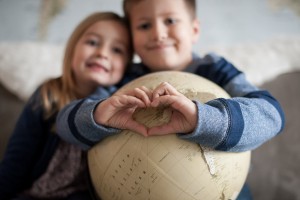 We announced that we had been invited back by the leadership of the Ecuadorian Covenant Church and that we would be beginning a season of support raising to return to Ecuador as long term missionaries.  And we jumped into a season of full time support raising, an effort we had been told usually takes about a year to complete.  And thanks to the wonders of Timehop (when FB reminds you of a picture you posted in the past), I know that it was a year to. the. day. that we met our fundraising goal.  The day we posted that picture in 2015 was the same day that we had a financial partner make a pledge in 2016 that pushed us over the edge.

And so, we have been given the green light to purchase our tickets to Ecuador, which will be happening any day now.  We are anxious to have a solid move date on the calendar and move forward into this next chapter.  And in the meantime, anxious to see how God continues to show up in the details – to remind us that we are seen and known and loved by one who moves mountains.