I don’t think I will ever forget the day that it arrived in our mailbox.  It was a few months into our son’s kindergarten year and there it was, all glossy and bold on the cover of TIME magazine.   “RAPE”, the headline read, four inches tall across the front, calling attention to the epidemic plaguing university campuses across our country.

The night before, our little kindergarten boy had just read his first book aloud.  He started in on the classic Snow, by P.D. Eastman, and made it through page after page; his voice gaining strength and confidence as he found his rhythm and it sunk in that he was actually reading.  I was so excited for him and the world that was opening up to him in that moment.  I was filled with visions of him spending hours on end pouring over titles I had loved as a child, wandering the stacks at the local library with new admiration and chasing adventures that will only ever be known to him between two hardcovers.

My dreams and visions quickly were pulled back into reality as I held that magazine in my hands the next afternoon.  In front of me was a little four letter word that would be so easily read by my five year old.   As I ripped the cover off and put it straight into the recycle bin, I started to come to grips with the fact that along with all the beauty of life that would be brought to him in learning to read, he would also start to become aware of the ugliness and brokenness around this globe in a way that he had not known before.  And there would only be so much I could do to protect him from all that now.  And while these difficult conversations were on the horizon, I wasn’t ready for them yet.

I shared this experience with a dear friend not long ago and he pointed me to this quote from Corrie Ten Boom’s  The Hiding Place:

He turned to look at me, as he always did when answering a question, but to my surprise he said nothing. At last he stood up, lifted his traveling case from the rack over our heads, and set it on the floor.

“Will you carry it off the train, Corrie?” he said.

I stood up and tugged at it. It was crammed with the watches and spare parts he had purchased that morning.

“Yes,” he said. “And it would be a pretty poor father who would ask his little girl to carry such a load. It’s the same way, Corrie, with knowledge. Some knowledge is too heavy for children. When you are older and stronger you can bear it. For now you must trust me to carry it for you.”

I immediately loved the imagery and language that it gave me to respond in like situations that arise often on this journey of parenting.

I don’t know about you, but these past few weeks have felt like too much.  They have been hard days to be a member of this human race.  The bombings and the murders and the hate and the fear and mass shootings – it’s all too much.

And in the midst of it all, I have been coming back to this passage from Ten Boom again and again.  The “suitcases” of this world that will be handed over eventually to my children feel like far too many at times.  With all of my being, I wish that we did not ever have to hand them baggage with labels like “racism” and “sexual abuse” and “terrorism” and “modern day slavery” and “police brutality” and “homelessness” and “hunger”.  I wish that the world that they were growing up in did not have this underbelly of death and destruction and despair.

But here is the real thing of it.  In most cases,  for us and in our privilege, most of it can continue to just be the underbelly. There are plenty of “suitcases” that because of our race, nationality, global economic standing, education, social network, we could just never hand over to them – or take a good hard look at for ourselves for that manner.  They could remain a backdrop that are rarely paid attention to.  And with the intention of protecting the innocence of our children,  we could just perpetuate ignorance. 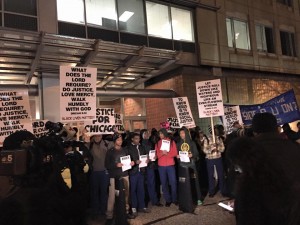 And so that is why last Monday night when Chris wasn’t home for dinner, I sat down with our kids at the table and we had an intentional conversation.  We talked about Dad being at a prayer vigil at the Chicago Police Department because our city is reeling from the murder of a 17-year-old black teen at the hands of a white cop.  Our conversation did not include every detail or statistic,  but we talked about racism and the reality that there are systems in place in our city and around the globe that uphold the lives of some over others.  And the week before that we had a conversation about how some of my son’s Muslim friends in his class may be coming to school feeling afraid.  Showing up at the doors of our neighborhood school not just weighed down by the normal burdens of a second grader, like how to wrap your mind around multiplication or who to sit with at lunch. But this day, classmates may be spending the day replaying the hate and fear of their own people heard on the evening news the night before.  We talked about what it means to be a friend to those kids who feel like they don’t belong and what it means to make school a safe place for everyone. The past few weeks I have found myself repeating to my kids that we must be willing to listen to the story of others, especially those who are different from us.

As Chris and I wade through the darkness around us and continue to ask ourselves where we are called to act and respond, one place I am convinced we must continue to respond is around our dinner table in the intentional conversations that we have with our kids growing up with unimaginable privilege.  And in many ways we don’t have this all figured out, but we can not let that be an unending excuse.  There are many days that go by that we don’t push into this hard stuff.  We turn our heads inward and don’t engage.  Or there are those parenting days when I have had to tell her every. single. time. that she has gone to the bathroom to go back in and wash her hands and the milk got spilled twice at dinner and they can’t seem to say a thing to each other without screaming and I have stepped on legos one too many times with my bare feet.  On those days, I am most likely to be found taking full advantage of the fact that my reality allows me to drag myself to bed at night without a second thought about the realities of others being lived out around me.  And then there is the fact that my kids are smart and they ask good and hard questions.  Questions that we often don’t have good answers for.  Questions that make us continue to confront our own racism and consumerism and paternalism and so on.  So often sticking to conversations about what game they played in gym class is mighty tempting.

But stumbling and stuttering we will push on because my hope and prayer as my children grow older is that they can spend their time and energy creatively pursuing peace and justice, instead of being consumed and immobilized by the discovery of the narratives of others that are so different from their own.   Or worse – refusing to accept that life for many is a completely different narrative all together.

We have to be careful what suitcases are handed over to our little ones and when, but we also make sure that they know that they do not carry these loads alone.  But may we who live with an abundance of privilege also begin to do our part to share the unbearable burden that has been laid on our brothers and sisters of this human family around the globe and learn better how to share their load as well.