In awe. Those are the only words to describe what I have felt on my last two visits up to Granizal. Five years ago “Community Transformation for Peace” (a ministry of Shalom Covenant Church) started working with teenage girls in this displaced community and the transformation taking place is visible. 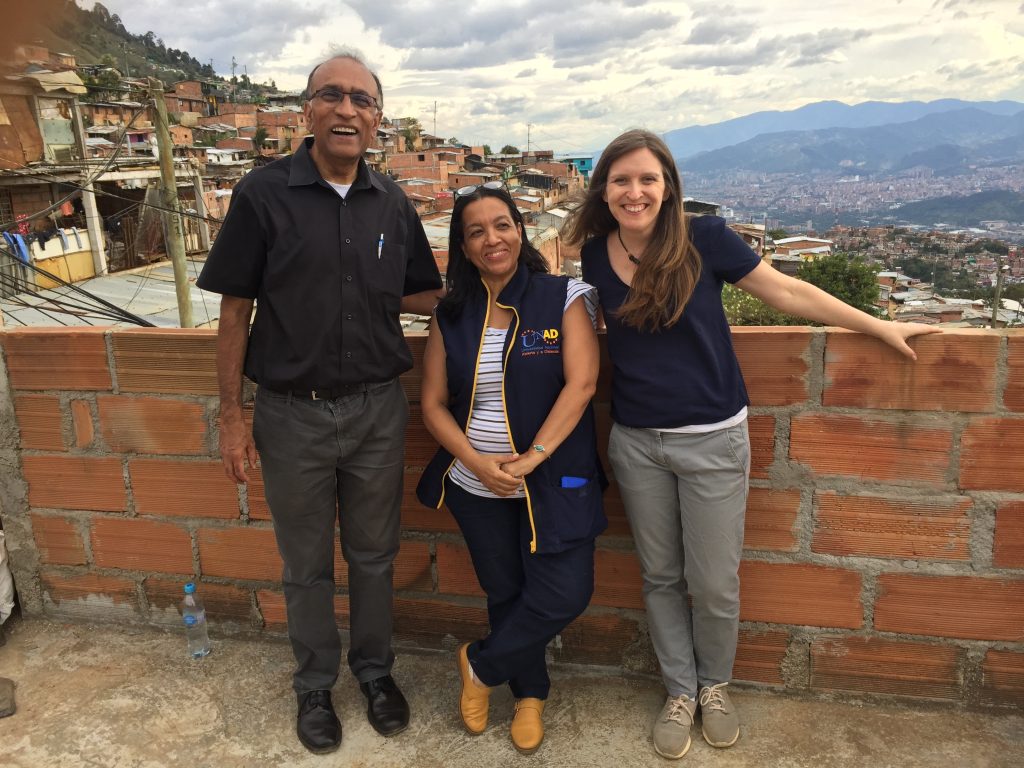 As I walked around the room I saw the teenage girls working together to create a large map of their community. They were painting, using their talents and gleaning from the wisdom of an art teacher from the University of Antioquia who has been teaching them different techniques and allowing them to tap into their creative side. The girls are a part of a soccer tournament that “Community Transformation for Peace,” organizes and which allows them to create a space for recreation and also formation. On Thursdays over 40 teenage girls come together to learn about different topics pertaining to their lives. In the past they’ve talked about conflict resolution, friendships, values, and basic discipleship. 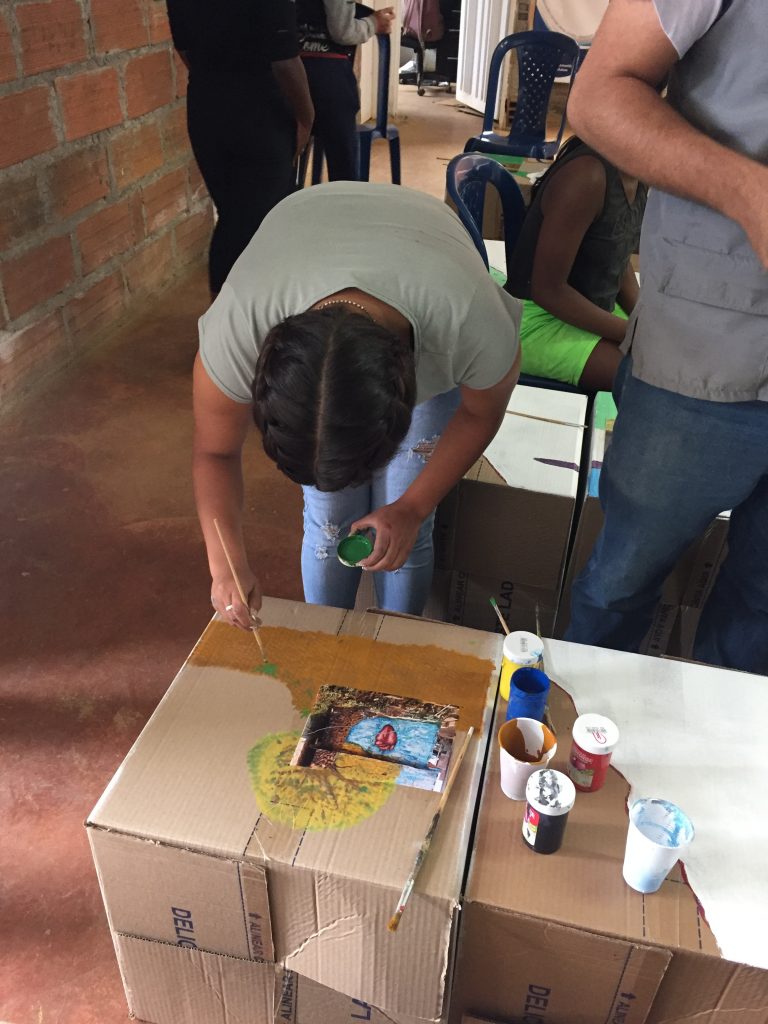 Over the past couple of months the leaders of the project have been leading them in a process of getting to know their community. They live in an area that is inhabited by over 25,000 people and that is broken up into different neighborhoods. Over 80% of the population in this area has been displaced from another area in the country or city.  There is no map of the area and many of the girls didn’t even know the other neighborhoods in their community. So together they ventured out to get to know the people and places in their community. They visited the different neighborhoods, talking to people, taking note of what the community had and what it was lacking. It was a process that facilitated dialogue, relationship, a new perspective, and a challenge to the participants. 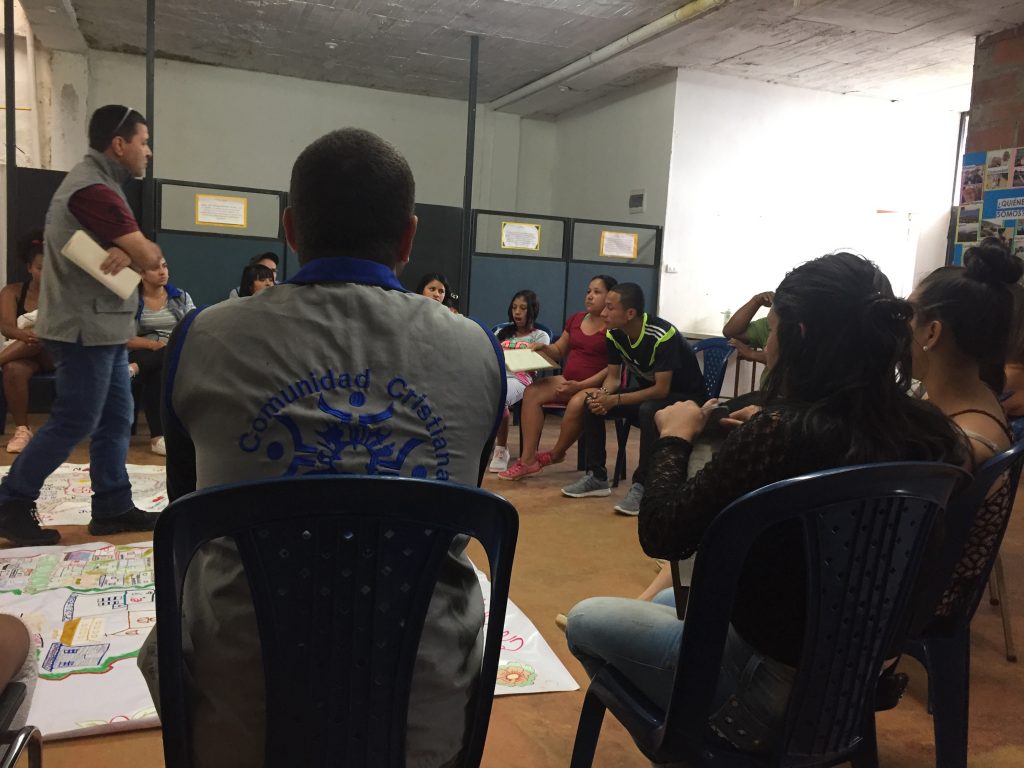 On the two occasions that I was able to visit the project this month they were engaging in cartography, with the help of the project leaders and the art teacher. They had together drawn out a large map of their community, distinguishing the different neighborhoods with drawings and words that represented what they saw in those places. They included the soccer field, Shalom Covenant Church, and other important landmarks for them. They also noted those things missing like a police station, a medical clinic, and drinkable water. On another map they wrote words and feelings and stories that represented their experience living in this community. Some showed the hard reality that these girls face living here. Others were messages of hope, of a commitment to make things better. 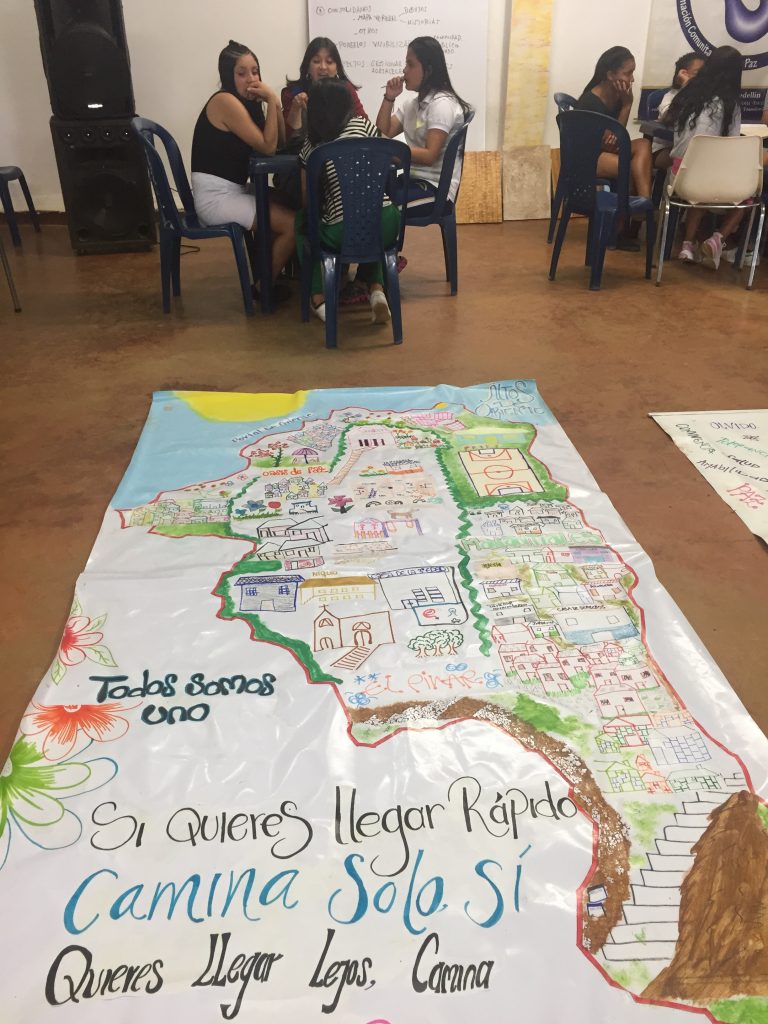 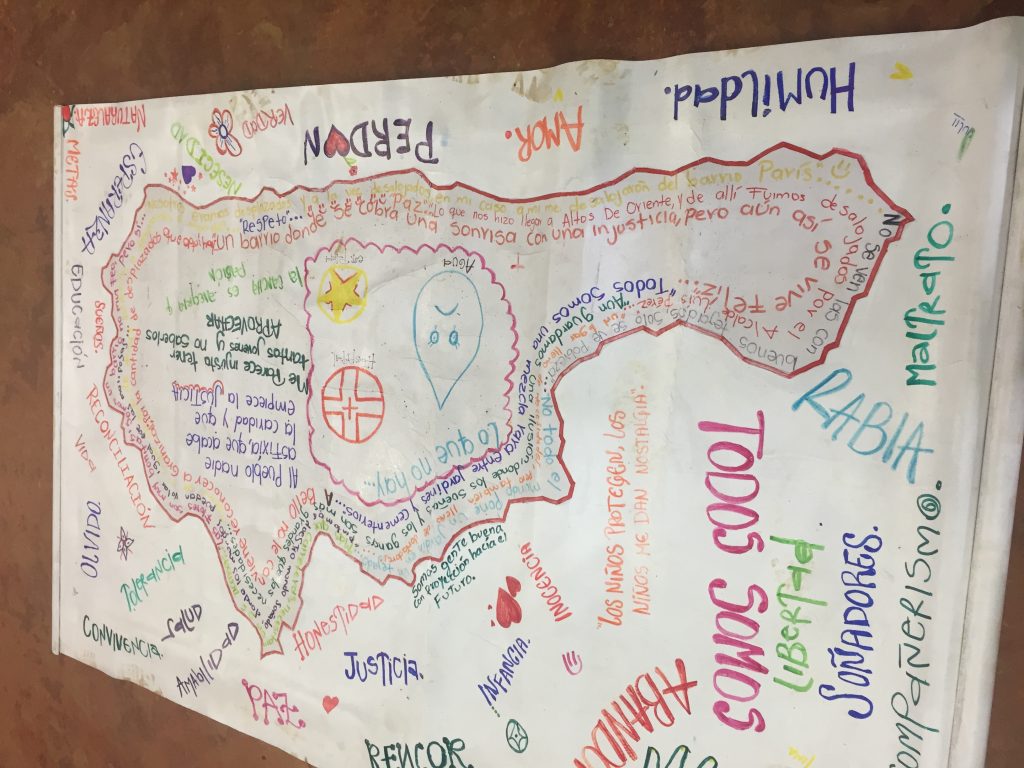 They talked about what was lacking in their community, what resources they do have and how they can take small steps to transform their neighborhoods. Then together, on cardboard boxes they began to paint a map, including photos of the different places they had taken, an artistic representation of their home. They also each made an individual artistic representation of their community on a small cardboard cutout of the silhouette of the map. This artwork will be presented to the community itself as a way of giving people another way of seeing the place they live in. It is designed to be a traveling display and there are already universities that have opened their doors to give the girls an opportunity to display their work and bring awareness to people that this community exists. Many people living in the city of Medellin are unaware that such a large community of displaced people exists, let alone what the reality looks like for those living there. The team leaders are making contacts with libraries, universities, parks, and even the different Metro stations to be able to give these girls the opportunity to tell their stories and exhibit the work they have done. 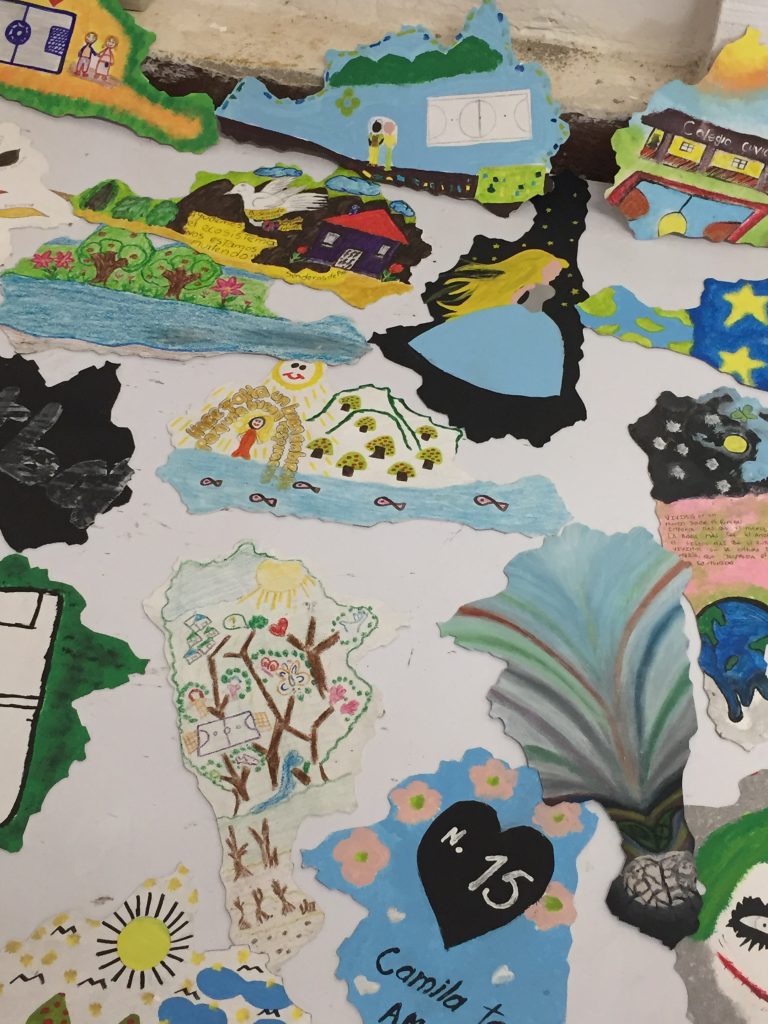 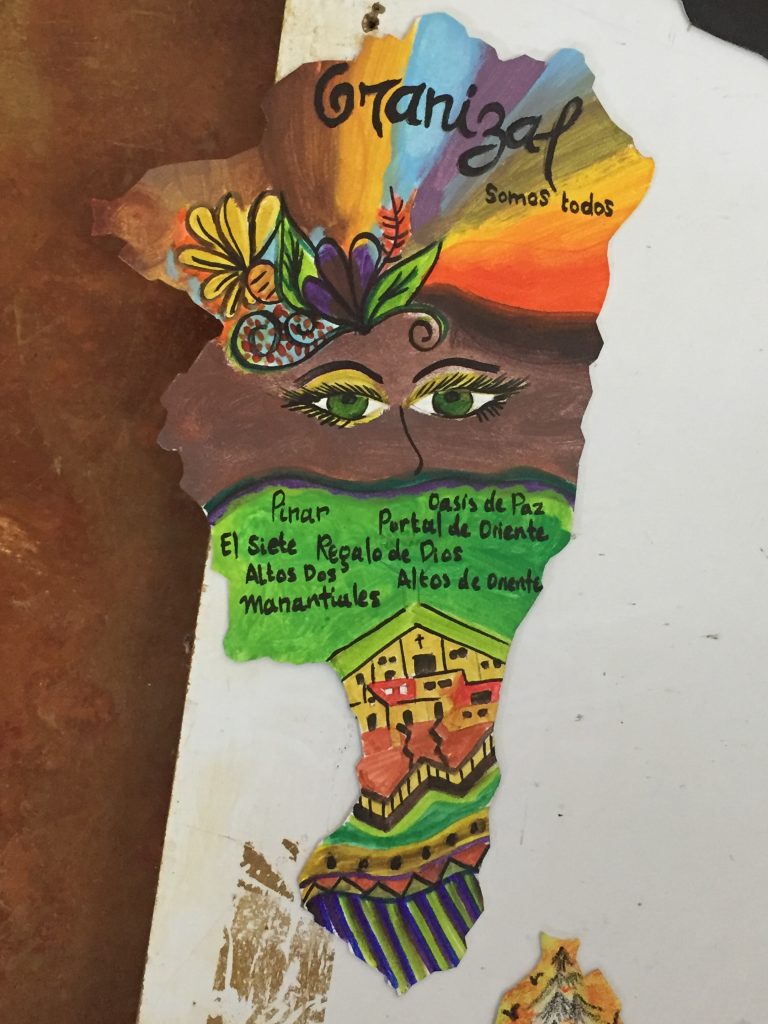 An amazing display of talent

When I asked why they decided to use cardboard boxes to paint the large map on he explained that they wanted to use a material that was representative of the girls experiences. He said that when people are displaced from their homes, the majority of times they pack what they can in a cardboard box or a large sack and that is what they have when they arrive in a new place, like Granizal. 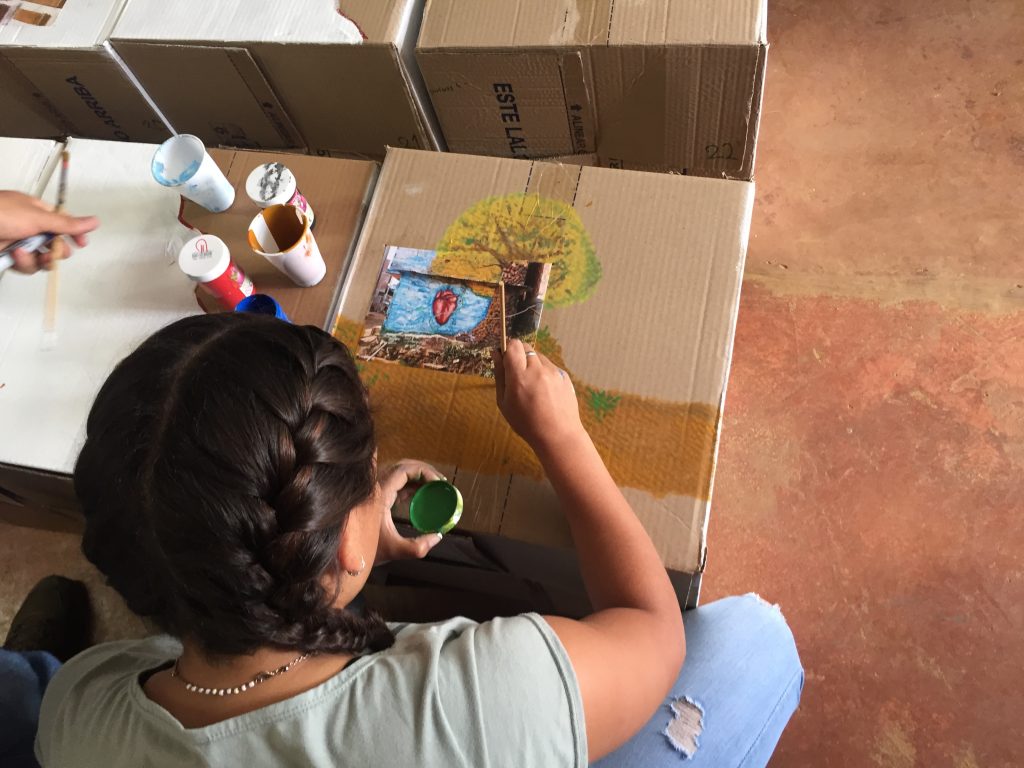 Working on the final cartography display

I remember the first year I started volunteering with the soccer program. I would go up on Thursdays with my friend Diana and served as a small group leader. We would talk through different topics related to peace and healthy relationships. It was tough. The conditions that many of the girls lived in were extremely difficult and with reason they were very hesitant to engage. I remember how loud it was as everyone talked over each other and how challenging it was to get people to share. Now five years later I see girls who are committed to the process, who are forming relationships with each other, who are recognizing the value that they have and that their community has. I see them using their talents and showing their creativity. I am in awe. Transformation does not take place overnight. But what I have seen over the course of this month reminds me that while slow, transformation is taking place. These girls are active participants in community transformation.

1 thought on “An exercise in cartography”