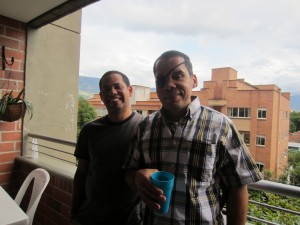 One of the biggest joys over the past couple of months has been reconnecting with old friends. This week Julio and I attended a conference on the church’s role in walking alongside victims of violence and who was there but one of Julio’s friends from college, Alex. Alex and Julio were roommates for awhile during undergrad and Alex was one of the groomsmen in our wedding. It was so great to see him and then have him over for dinner the next night. Alex has a great sense of humor. I’ll never forget him telling my family who visited Colombia for the wedding that they could call him the “Romantic Pirate.” I don’t know half of the things Julio and he were laughing about…but it was great to see them together again.

Alex has an incredible story and an incredible heart. Alex wears an eye patch because he lost one of his eyes when he was the victim of a shooting. He was actually one of the only survivors of a massacre. He now works with a prison ministry here in Medellin. I’m thankful for the time to reconnect with Alex. I’m thankful for the opportunity to learn from the stories of others.