This post was taken from Covenant missionaries serving in Asia sent on Feb. 4, 2014

Today marks the fifth day of the Lunar New Year festival where we are.  There was an increased level of firecracker noise today, so we looked up this particular day of the festival on Wikipedia to find this:  “This day is the god of wealth’s birthday… it is common that on the 5th day people will shoot off firecrackers to get his attention, thus ensuring his favor and good fortune for the new year.”

So all day we have heard the locals summoning the god of wealth, since about 6am and even now, every few minutes, and the ground outside has been covered in red from all the wrappers of the spent fireworks.  Everywhere we went today we had a reminder that the people were evoking this god to bring them wealth… cultural tradition, maybe, but still a bit unsettling. 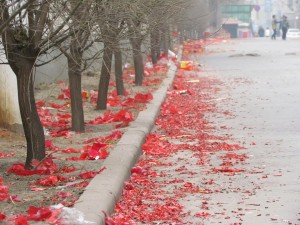 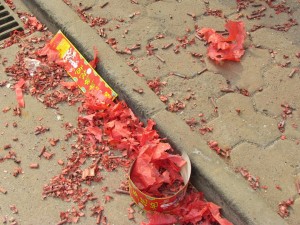 Then tonight we were out to dinner and when we came out of the restaurant, there was nearly an inch and a half of snow covering the ground.  The red reminders of peoples longing for wealth and prosperity were covered by a pure blanket of snow.  Isaiah 1.18 came to mind as we walked home in this snow on the same street the pictures above are from… 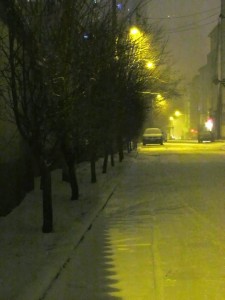 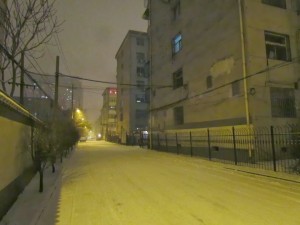 count smog-fall) since October or November here… and Dad chooses tonight to send the snow – and enough to cover everything on the streets.  I think maybe Dad is giving a gracious reminder to those who would see it that there is only one God in this world who has power and that power comes through forgiveness.