by Megan Herrold, 2018 Graduate of North Park Theological Seminary with an MA in Christian Formation 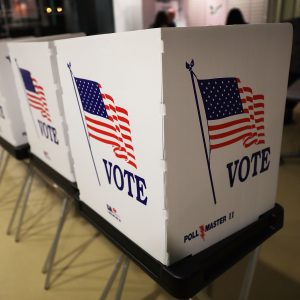 About 7 or 8 years ago, I made a pledge to myself that I would vote in every election that I was able to vote, at least until 2020. I had done the math and realized that it had been less than 100 years since women gained voting rights across the United States. When my grandmother was born—just two generations ago—this still wasn’t the case. I decided that as a woman, I should make a special effort to vote until at least that century mark, in honor of the efforts of the women before me who made it possible.

I haven’t always managed to keep this voting pledge. There are a few primaries I missed, twice because I was living overseas and once because I was serving as a Polling Place Administrator assigned to a different precinct for the whole voting day. But I have voted in every general election this decade, even when I was abroad.

More and more, I have also come to feel that it is my responsibility not just as a U.S. citizen and a participant in democracy, but also as a Christian. I believe that God calls us to be involved in our community, whether we measure that on a local, state, or national level. In all of our actions, we should be seeking “God’s glory and neighbor’s good” and living out the commandment to love God and our neighbor as ourselves.[i] In a society such as ours, where our leaders and lawmakers are elected, this means I actively participate in the selection of those leaders, and put my best efforts into selecting those whose words and actions will bring glory and good to God and neighbor.

Where Is It Written?

Is there any verse in Scripture where God specifically tells us to vote? I don’t think so. But even though I’ve read the Bible, it’s pretty long, so I realize that I might have missed something. I do think, however, that Scripture makes clear that we Christians are meant to be involved in our communities; we should recognize that our actions have consequences on the world around us and take steps to minimize any negative consequences of those actions. Amos chastises the wealthy women of Israel whose materialistic demands create harsher labor conditions for the less privileged members of society.[ii] Mordecai tells Esther that she has to speak up for her people who are being threatened with annihilation.[iii] Even in exile, the people of Judah are told to put down roots and “seek the shalom of the city,” establishing peace and justice for themselves as well as those around them.[iv]

None of this was written in a society in which people had much choice in who their leaders were or what laws were made, although Scripture does show us characters with various levels of access to power structures. So as followers of Christ, we all need to do some extrapolation to figure out how ancient texts apply to us today. For me, this means being involved in society at any level and to any extent that I can. It’s an important reason why I vote. It also means that I seek the same for my neighbor, i.e. my fellow Americans and other members of my community.

A Legacy of Disfranchisement

It’s ironic that we live in a country that prides itself on being ruled by the people, yet historically has made people fight long and fierce battles to access the primary avenue of this rule: namely, the voting booth. Most of us know at least the general history of the women’s suffrage movement and the 19th Amendment, or the Civil Rights Movement and the Voting Rights Act. Some of us may know that Americans of Asian descent had to fight for citizenship status and voting eligibility. Even thirty years after the 14th Amendment, American-born Wong Kim Ark had to go to the Supreme Court for recognition of U.S. citizenship.

In any case, our country’s history seems strangely intertwined with these two ideas of giving people the right to choose their leaders while preventing certain groups from exercising that right.

It’s this history that makes me so apprehensive about the recent wave of laws that have made it more difficult to vote. The one that’s gotten attention lately is Georgia’s voter-roll “purge”—the removal of names from a list of registered voters for one of several reasons; the reasons vary from state to state, but not voting in the last election, or registering with a name that doesn’t exactly match other government databases are two examples. The attention on Georgia is probably because the man who oversaw the purge is also the gubernatorial candidate who’s most likely to gain from it. But this purge practice is not just a Georgia phenomenon: Carol Anderson devotes a whole chapter to the practice in One Person, No Vote, detailing thousands of names cut from voter-registration rolls in Virginia, Florida, and Indiana, and 2,000,000 names purged in Ohio in recent years.[v]

And the purge isn’t the only practice that’s been enacted in the last couple of decades. Voter ID laws that prevent so-called (and virtually non-existent) in-person voter fraud are probably the most well known,[vi] along with partisan gerrymandering after the 2010 census.[vii] But governments can also cut voting hours, close early-voting locations, or even limit the number of places where people can register to vote in the first place. All of these tactics have been employed in the last couple of decades under the guise of fairness and equal access even though those who implement them know they have an unfair, unequal, and unjust impact.

Historically, both sides have tried to rig the rules in their favor. It just so happens that this time it’s the GOP that is doing so. Anderson surmises that this is because the U.S. populace is becoming more liberal,[viii] and rather than adjust their policies to better serve people as public servants, they are trying to give greater decision-making power to those who already support them as they are.[ix]

I can’t speak to anyone’s motivations. It does strike me as strange, however, that anyone who would choose a job in public service would accept or promote a system that doesn’t enfranchise the entire public.

It also seems strange that a country that has historically disfranchised so many people, and ostensibly regrets doing so, would not be more hesitant to implement policies that could disfranchise people, even in the name of combating voter fraud. Yes, voter fraud is also a part of our history, but these anti-fraud laws are justified as prevention against in-person voter fraud, which has never been a significant issue. It’s a problem that’s been invented over the last couple of decades to justify laws that prevent certain demographics from voting.

(Side note: The fact that historically, both ‘sides’ have participated in voter suppression tactics somehow makes it all the more frustrating that the same groups of people are the targets, no matter who’s doing the suppressing: women, youth, the poor, and/or people of color.)[x]

Why do I care about voter suppression? I’m registered to vote. I don’t need an ID where I live, which is good, because having just finished grad school, I still have an out-of-state driver’s license. In fact, I live in a state in which lawmakers from both parties have taken steps to make voting easier, not harder.

I care about voter suppression because as a Christian, I believe it’s not only my calling to participate in society, but to make sure my neighbors have the same access to participate in accordance with their own calling. I care because I don’t believe that depriving people of equal access to a society’s structures of power is good or godly, especially when done in secret and justified with lies.

And yes, that might mean that more people who disagree with me will be able to vote. They may vote for things that I believe are ungodly. But I don’t believe in resorting to clandestine or dishonest practices in order to see God’s will done on earth, because I don’t believe that it’s God’s will that we act in a clandestine or dishonest manner. God is love, truth, and light, not hate, lies, and darkness.

A few months ago, I got to spend a weekend with my niece. For our bedtime reading, we read one of my childhood books, Happy Birthday, Samantha, a book in the American Girl series. In the book, which takes place in 1905, Samantha’s grandmother and aunt have different views regarding the women’s suffrage movement. My niece was shocked to realize that women used to not be able to vote in the United States. It made me think again about my grandmother, who was born during that time.

My niece will be seven years old on Sunday. My hope is that when she is eligible to vote in the 2030 midterms, she will do so knowing that ALL of her fellow Americans are fully able to join her.

[vii] Jane Mayer, “The States: Gaining Ground,” in Dark Money: The Hidden History of the Billionaires Behind the Rise of the Radical Right, (New York: Doubleday, 2016), 333-42.

[x] “Voter Suppression by any Other Name,” hosted by Bob Garfield, On the Media, WNYC Studios, September 28, 2018.