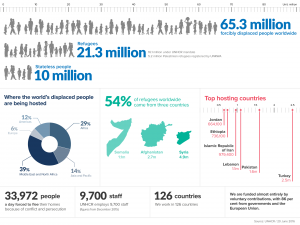 The refugee crisis in our world is no longer a secret. The images of the bodies of children washing ashore and children fleeing bombings have become all too common in the news. With each new horrific image, we are forced to lean a little closer to the struggle of millions. Yes, millions.

In the latest report from UNHCR (the UN Refugee Agency), there were over 65 million forcibly displaced people in 2015. This is the highest number of displaced people at any time in recorded history.

It is in light of this that Stephen Bauman, Matthew Sorens, and Dr. Issam Smier write Seeking Refugee: On the Shores of the Global Refugee Crisis. They argue that “the arrival of refugees represents an opportunity for the church, that we have a clear biblical mandate to respond, and that refugees—rather than people to fear—are actually remarkably resilient people who are a blessing to the country that receives them.” 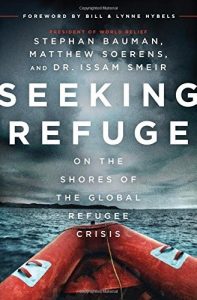 But, in light of something that seems just so overwhelming and complex, how can we respond?

First, we must be aware that a very small percentage of refugees are ever resettled. In 2014, only about one half of 1 percent of all refugees were resettled. As well, the average amount of time from when a refugee first flees their country until they are finally settled in a permanent setting is seventeen years. Seventeen years. Let that sink in for a moment. What have you done in the past seventeen years? I have received two degrees, worked at least four different jobs, gotten married, moved across the country, parented two children, and the list could go on.

Refugees are forced to move from their home because of conflict or persecution. Given this reality, we, as the church, do have a role to play for displaced people here in our own communities, country, and globally.

For the relatively small number of refugees that do resettle in our own communities, Bauman, Sorens, and Smier provide several ways the church can respond:
• Providing a warm welcome,
• Teaching English,
• Serving through legal services,
• Helping a refugee become a homeowner, and
• Serving unaccompanied minors and asylum seekers.

For those refugees who are not in our communities or country, we can use our voice to influence policy that impacts refugees. There are creative and unique ways to be an advocate that don’t look like the typical phone calls or meetings with politicians. Given the recent Executive Orders, using our voice and vote on behalf of refugees is all the more urgent.

What would you add to this list of ways we can respond? How are you and your local congregation responding?