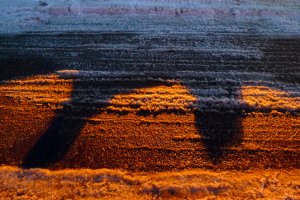 I sat next to my friend, a pastor, and across from his wife and young son in a booth in a suburban diner listening as he recounted what had happened to them recently. The emotion was still fresh, a mix of anger, fear, and confusion. I felt the same as the story spilled out. He gave me permission to share it here. I’ll call my friend Pedro.

Pedro is originally from Mexico and recently became a citizen of the U.S.A. His wife, also Hispanic, was born in this country. I have visited their church, worshiped with their community, and shared many meals with them. They were once kind enough to invite me to preach despite the rusty state of my Spanish.

A few weeks after the presidential inauguration Pedro and his family drove to a local auto parts store. As is common at these kinds of stores, my friend opened the hood and had begun adding windshield wiper fluid. That’s when it began. A man who’d been shoveling snow from the sidewalk in front of the store approached the car and told my friend that he wasn’t allowed to open his hood in front of the store. Pedro knows from experience that this simply isn’t true but, nevertheless, he responded that he was almost finished and he was about to leave. The white man wasn’t pleased with this response and began aggressively telling Pedro to leave, and then… “Leave now or I’m going to call the police. Go back to your country!”

In the restaurant, in front of his young son, my friend didn’t want to include all of the crude and hateful language the man had used against his ethnicity and country of origin. His wife chimed in, describing the rising anxiety she felt watching her husband berated, his place in this country denied, her son in the back seat unaware of how quickly an uneventful day had become fraught with ugly possibilities.

Pedro again told the man that he was almost done. Infuriated, the man scooped up a pile of snow onto his shovel and dumped all of it onto the pastor’s legs and into his shoes.

I don’t know how he kept a level head. Probably he was remembering his wife and son in the car and the threat to call the police. Who would the officers believe, the white man or the man with an accent and a Latino-sounding name? And so he closed the hood and walked into the store. After explaining what had happened to an employee behind the counter Pedro waited for some sort of sane response, perhaps a bit of compassion.

“I’m sorry. There’s nothing we can do. That man owns the store.”

So Pedro walked out of the store, got in the car, and drove away with his family. What else could he do?

He finished the story. We shook our heads. I’m sorry that happened to you, I said. Or I think I did; my head was swimming, imagining myself in his ice-filled shoes as my own wife and children looked on.

My friends told me about their church and about the members who are afraid. The stories of deportation and harassment are everywhere and gaining frequency. Friends are sleeping one one another’s couches rather than driving home after dark. The threats from Washington D.C. are not simply one news story among others- they are visceral and attached to particular bodies and families.

The question facing the churches today is not whether or not these sorts of hateful things are happening. They are. The question is whether or not we care. Do we genuinely believe that we are attached to one another across race, ethnicity, culture, and language? Do we believe that the eucharistic blood shared between Christians is, as Jesus told us, thicker than the blood of biology and race? My friends and their church full of recent immigrants want to believe that this basic Christian theology can be true.

They need it to be true.