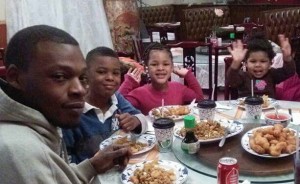 Noah Patton: I am grateful for the help and attention we have received during the water crisis in Flint. My family was affected tremendously by the water crisis. As of today my family and I are still enduring the struggle the water crisis as created. We still don’t know how safe the water is, but yet we attempt to live our lives as if the issue doesn’t exist. My youngest child, who is three years old, has the highest lead levels out of all of our three children. I have been contacted by the state of Michigan regarding the matter. So far not much has been done to insure our family that we can safely drink, bathe and use our water on a daily basis. Cooking and getting the kids ready for school has been one of the biggest challenges. It is also hard to maintain clean and safe eating utensils. All in all the whole ordeal has become overwhelming and very time consuming.

Pastor Aaron Dunigan: The Water Crisis has affected my family in various ways. One way being the fact that my daughter has been in the hospital for three major emergencies, twice on Christmas. On Christmas she spent eight days in the hospital in the children’s ICU next to kids who were dying from various illnesses. She was hooked up to oxygen machines which put a heavy toll on my wife and I, trying to balance working and being at the hospital with my daughter. She was in the hospital with pneumonia and RSV, a respiratory virus . They say that RSV is the cousin to the Legionnaires disease. Secondly my son was born six weeks early. We believe that contaminated Flint water may be to blame for his premature birth. My son also spent his first Christmas in the hospital for 7 days with RSV as well. For almost a year my daughter thought that taking a bath was pouring bottles of water into a large tote which sits in our hallway. The mental anguish has been worse than the physical. But even despite all of these things my family and I continue to be advocates for the people of Flint, and we continue to give our services at no cost to help others that lack access to clean and fresh water.

We have lost our confidence in both the City and the State based on their response to the water crisis. With that said, we choose not to be victims, we know we are victors. We fight for our community, and know that in Jesus’ name there are so many whose lives we can touch.

2 thoughts on “Without Water – Flint, MI”