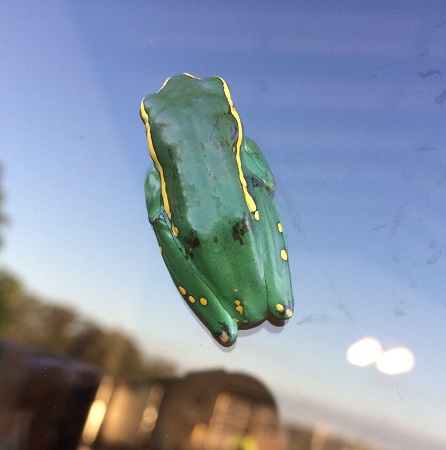 This frog was sitting at about eye level on our door for a good 4 days.  Maybe it’s used to South African time, laid back and letting go.  Running late?  No worries.  People expecting things of you?  No worries.  You said you’d be there 7 days ago and you haven’t shown up yet?  No worries.  Reminds me of our experience getting visa extensions, we had to just relax and not worry about timing.  After having applied for them in December, we got notice to pick them up the end of January, actually the time lapsed was not bad considering Christmas and New Year were in there.  We drove to Durban, a 2+ hour drive, to pick up our visas, waiting in a line that took us about an hour to get to the counter only to find out that Roy’s had the wrong dates entered on it.  We then had to reapply for his visa, filling out the proper “rectification” form, waiting again in an hour’s worth of lines (which was much shorter than usual because the agents kindly bumped us up), waiting again for it to be processed through the Johannesburg and Pretoria offices, and again driving to Durban to pick it up.  It isn’t yet correct, but at least the dates given now are beyond what we applied for, rather than a month and a half earlier!  I had a similar test of patience as I opened up a bank account this week. After a morning of 2 police office visits with a getting lost with google maps telling me I had arrived! in between, then a visit to our farm owner’s office to get his signature on the proper paper, NOT the one from the police, I then had the waiting game again.  Ah.  I know, I have been in horrific lines in the states too (DMV!!), and there have been red tape demands there as well, but it seems to me like Africa wins the prize for forms and office bureaucracy.  At least a line is usually a line in South Africa, as opposed to the typical mob pressing forward that we find in Central Africa.  Though we have had some crazy experiences with lines here as well.  I suppose some of you were praying for patience for us?  I actually wasn’t stressed too much during these things, especially because so many of the agents helping us were kind and helpful. May God grant us peace and kind attitudes as we continue to learn to just take things in stride.

As Covenant missionaries, we are working with all the tribal groups of the Central African Republic (CAR) but are trying to give special attention to the Fulani, a Musxlim, cattle herding, and semi-nomadic people group. We live on an experimental/training farm, near a mission station which has a hospital plus bible and nursing schools. We are establishing relationships with the local people groups through compassion ministries; Roy through agriculture and Aleta through public health and visitation, in order, ultimately, to share the good news of Jesus the Messiah with them. CAR is one of the least developed countries in the world and is currently in continual crisis (since the coup in March 2013), so reaching out in compassion is key to reaching their hearts. Due to the ongoing conflict and resultant ethnic cleansing in CAR, we are crossing the border to interact with our Fulani contacts.
View all posts by danforth →
This entry was posted in Whatever. Bookmark the permalink.