Please pray for the trauma healing (TH below) seminars that our dear SIL missionary colleagues, Cami and Larry Robbins, are helping with in CAR’s capital and beyond, even as far as our little mission.  Here is a story that Cami shared recently:

We had some amazing facilitators.  They truly loved the children and were so good with them.  Here is an example.  After I did the demonstration with the balloons, a little Mxlem girl, A, got back to her table and started crying softly.  Apparently in her culture, you don’t talk about your feelings, and she had some huge feelings.  One of the facilitators took her outside to talk with her, but she was weeping and couldn’t speak.  He came back in to get me and I said, “we need a woman.” We called on our very best woman facilitator, Flavia.  She has taken both adult TH trainings with us and she works with Tom Peters in the orphan care project of Vision Trust.  She is amazing.  She went out and sat with the little girl a long time.  Slowly the story came out.  Several years ago, when there was the Anti-Balaka backlash after the Seleka rebels’ brutal takeover of Alindao, her family was fleeing.  Her father saw the A-B aiming his gun at them and he jumped in front of A and took the bullet that was meant for her.  She looked back and saw the cruel brutality of the A-B.  At some point, she and her tiny brother ended up in a refugee camp in Bangui.  Her mother has disappeared and no one knows where she is.  A had never talked about this and grieved, even though it had been years.  After talking about it and crying, Flavia prayed with her.  A was a changed little girl.  She became happy and very engaged.  The director of ACATBA and his wife take care of her and her little brother. 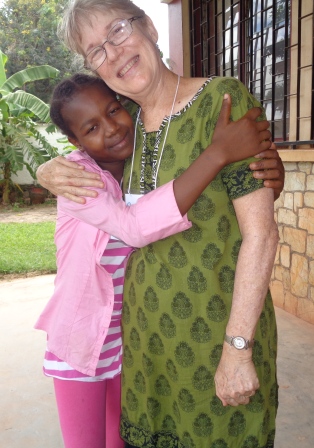 As Covenant missionaries, we are working with all the tribal groups of the Central African Republic (CAR) but are trying to give special attention to the Fulani, a Musxlim, cattle herding, and semi-nomadic people group. We live on an experimental/training farm, near a mission station which has a hospital plus bible and nursing schools. We are establishing relationships with the local people groups through compassion ministries; Roy through agriculture and Aleta through public health and visitation, in order, ultimately, to share the good news of Jesus the Messiah with them. CAR is one of the least developed countries in the world and is currently in continual crisis (since the coup in March 2013), so reaching out in compassion is key to reaching their hearts. Due to the ongoing conflict and resultant ethnic cleansing in CAR, we are crossing the border to interact with our Fulani contacts.
View all posts by danforth →
This entry was posted in Fulani/M friends, Mission. Bookmark the permalink.