The snow was pretty thick for a few days, BUT 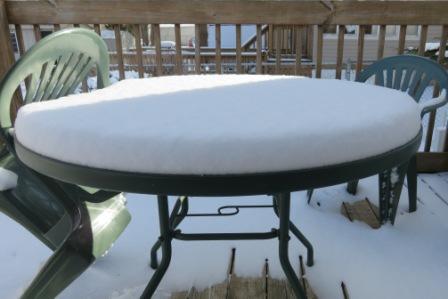 just before Maddie’s birthday party, green grass once again appeared.  Roy was out checking over the dormant veggie garden and whatever green he could find when Emrie went running out to join him.  Whenever he’s around, you probably will find her shadowing him.  Twitterpated with her Grampadee who she calls Bucky. 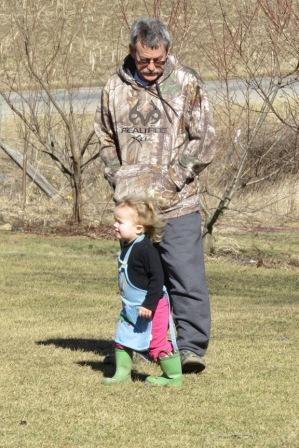 The kids painted beautiful pictures with acrylics on canvas, and played soccer in the backyard, barefoot in February!  I think the party was well enjoyed. 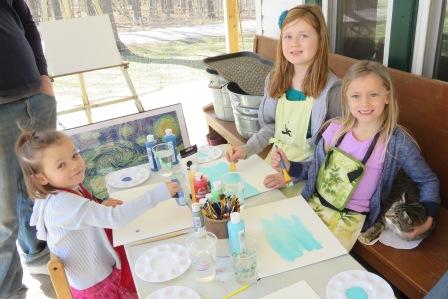 As I write, the snow is falling again, an expected 7-10 inches for our little town.  Whoo boy!

As Covenant missionaries, we are working with all the tribal groups of the Central African Republic (CAR) but are trying to give special attention to the Fulani, a Musxlim, cattle herding, and semi-nomadic people group. We live on an experimental/training farm, near a mission station which has a hospital plus bible and nursing schools. We are establishing relationships with the local people groups through compassion ministries; Roy through agriculture and Aleta through public health and visitation, in order, ultimately, to share the good news of Jesus the Messiah with them. CAR is one of the least developed countries in the world and is currently in continual crisis (since the coup in March 2013), so reaching out in compassion is key to reaching their hearts. Due to the ongoing conflict and resultant ethnic cleansing in CAR, we are crossing the border to interact with our Fulani contacts.
View all posts by danforth →
This entry was posted in Family & Friends. Bookmark the permalink.