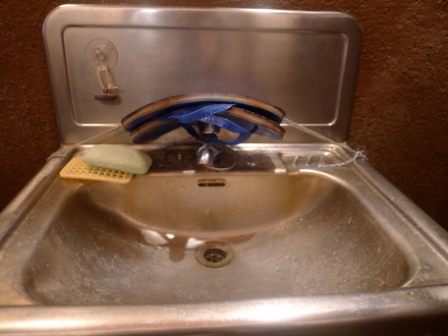 We have a couple of Swedish nurses, Lisa and Emma, helping out for about 3 months here, and we had to have some repairs done on their house before they came.  This particular repair job was done by Lisa, not our local repairmen.  Ingenious way to keep the water from shooting out the top of the faucet, eh? That particular faucet had been one of the repair jobs, and it was a brand new one.  Oh well.  I put in a request for another fix-it job, and thought it had been taken care of.  3 days later, I found out that it hadn’t been done yet, as Kim Cone came to me looking for a new faucet from the missionary houses’ stockroom of parts so he could help Lisa & Emma out.  I didn’t find one there, and Kim had gone off to help out at the CEFA farm, so I went to our mission’s garage and repair center’s stockroom and bought a new faucet.  Later that day I heard from Emma and Lisa that it had just been fixed, only a couple of days late, so Kim wouldn’t need to do it.  I went to return the faucet, and when I tried to hand it to the stockroom manager, he turned to me (I have to admit I was interrupting some other work) and said, “WHAT am I supposed to do with that???!!?!” in a not very pleasant tone.  I was apologetic when I found out he was doing an inventory prior to leaving on vacation, and he wasn’t going back in to the stockroom office.  His “vacation” will entail trying to find his brother in the capital, who was abducted by Sel-xka soldiers a couple of weeks ago.  You can imagine his state of mind.  When  I heard his quick and tense response, rather than getting defensive, I immediately thought of my post this past week of “if I don’t have love”.  I heard myself in his tone, in his quick retort, with no preamble of greetings and care.  I have responded like that so many times, and without the background of a possibly dead brother to make me short on words and patience.  Lord grant me the ability to bite my tongue and hold back on the acid, Lord grant me the ability to greet with love and care for the person I’m interacting with.

As Covenant missionaries, we are working with all the tribal groups of the Central African Republic (CAR) but are trying to give special attention to the Fulani, a Musxlim, cattle herding, and semi-nomadic people group. We live on an experimental/training farm, near a mission station which has a hospital plus bible and nursing schools. We are establishing relationships with the local people groups through compassion ministries; Roy through agriculture and Aleta through public health and visitation, in order, ultimately, to share the good news of Jesus the Messiah with them. CAR is one of the least developed countries in the world and is currently in continual crisis (since the coup in March 2013), so reaching out in compassion is key to reaching their hearts. Due to the ongoing conflict and resultant ethnic cleansing in CAR, we are crossing the border to interact with our Fulani contacts.
View all posts by danforth →
This entry was posted in Mission, Thoughts/musings/ideas. Bookmark the permalink.