Independance day in this country is December 1st, but the local authorities decided that it should be celebrated on the 11th for reasons unknown to the general population. What they say goes, so the parade happened a week and a half late. Here are some photos of the ag project, CEFA’s, entry in the parade. The silhouette with the military hat is the “sub-governor” of the region. Roy’s group presented fruit and seedlings to the dignitaries.  There were umpteen groups of schoolkids and women’s groups and church groups and health groups, lots of marchers in matching tshirts or patterned outfits.  There actually were a few silly clowns, a bicycle stunt man, with the ending climax being a bunch of motorcyclists doing tricks and driving way too fast into the crowd which had oozed onto the road just beyond the grandstands. 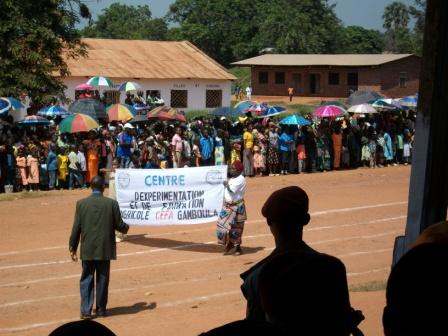 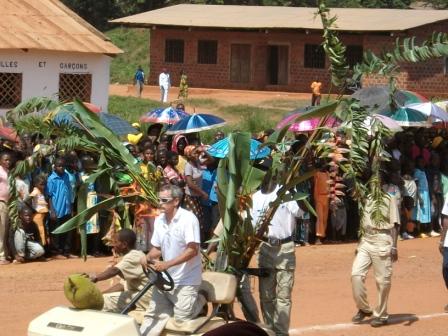 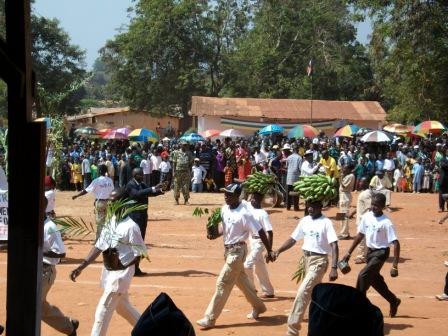 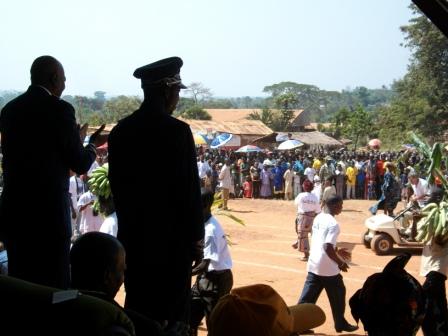 As Covenant missionaries, we are working with all the tribal groups of the Central African Republic (CAR) but are trying to give special attention to the Fulani, a Musxlim, cattle herding, and semi-nomadic people group. We live on an experimental/training farm, near a mission station which has a hospital plus bible and nursing schools. We are establishing relationships with the local people groups through compassion ministries; Roy through agriculture and Aleta through public health and visitation, in order, ultimately, to share the good news of Jesus the Messiah with them. CAR is one of the least developed countries in the world and is currently in continual crisis (since the coup in March 2013), so reaching out in compassion is key to reaching their hearts. Due to the ongoing conflict and resultant ethnic cleansing in CAR, we are crossing the border to interact with our Fulani contacts.
View all posts by danforth →
This entry was posted in Ceremonies & church happenings, Transportation. Bookmark the permalink.