Want to harvest some cinnamon bark? 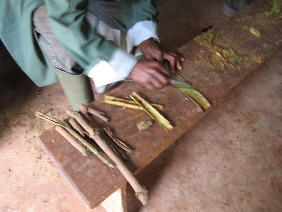 It looks like it’s a tedious process, but it must be worth it, ‘cuz who doesn’t like cinnamon? The ag guys cut some small branches and cut the bark off and scraped the outer layer of skin off. Then as the inner layer of bark dries, it curls up into the cinnamon bark curls we know from the Spice Islands shelf in the grocery store, smile. We also actually use the leaves from the tree in tea and coffee to add a cinnamon taste – a little less destructive to the tree, eh? I don’t know if it would go over very well to have little pieces of green leaves in one’s cinnamon rolls, though.

As Covenant missionaries, we are working with all the tribal groups of the Central African Republic (CAR) but are trying to give special attention to the Fulani, a Musxlim, cattle herding, and semi-nomadic people group. We live on an experimental/training farm, near a mission station which has a hospital plus bible and nursing schools. We are establishing relationships with the local people groups through compassion ministries; Roy through agriculture and Aleta through public health and visitation, in order, ultimately, to share the good news of Jesus the Messiah with them. CAR is one of the least developed countries in the world and is currently in continual crisis (since the coup in March 2013), so reaching out in compassion is key to reaching their hearts. Due to the ongoing conflict and resultant ethnic cleansing in CAR, we are crossing the border to interact with our Fulani contacts.
View all posts by danforth →
This entry was posted in CEFA/Ag. Bookmark the permalink.