We just celebrated the official wedding of Simeon and Viviane today. Weddings are few and far between because of the great expense, so just setting up a home together after making arrangements between the families is the norm. We have only seen 2 weddings in our 11 years here, and both of those were weddings held for long established couples, families with children. Here’s a photo of Simeon & Viviane’s kids, dressed up for the wedding. 4 of the kids in the photo are theirs. 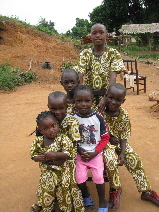 Here’s the couple, with the town mayor, after the civil ceremony downtown. 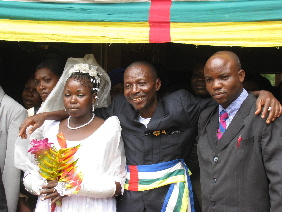 Here’s the blessing during the church ceremony: 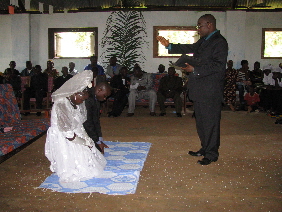 All during both ceremonies, friends and family members would dance up to the couple, spray them with perfume, throw confetti and rice on them, ululate and sing and clap and cheer, quite a different picture than your typical U.S. wedding. During the civil ceremony, the mayor asked Viviane “Today Simeon is strong and handsome, but tomorrow, when he’s old and weak and can’t work and blind and peeing all over himself, will you still stay with him?” She said ” I WILL!” A bit later, it was Simeon’s turn: “Today Viviane is beautiful and young, but tomorrow when she has been in an accident and has lost one eye and can’t walk and can’t work in the garden, will you still stay with her?” He answered, “I WILL, until death comes!” There was a series of like questions for each of them… The celebration took all day, what with two ceremonies, a meal for the bigwigs from downtown and then the main reception at their home until midnight. Here are some kids, celebrating with some of the confetti that was EVERYWHERE!! 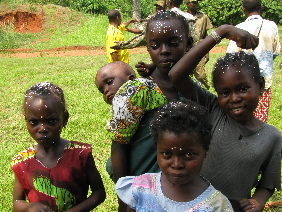 Here’s the happy and beautiful couple. Pray for them, for their relationship, for healthy marriages to abound in this country where brideprices are still paid and women are too often judged by childbearing and work ability. 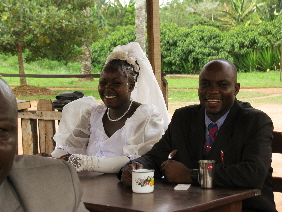 As Covenant missionaries, we are working with all the tribal groups of the Central African Republic (CAR) but are trying to give special attention to the Fulani, a Musxlim, cattle herding, and semi-nomadic people group. We live on an experimental/training farm, near a mission station which has a hospital plus bible and nursing schools. We are establishing relationships with the local people groups through compassion ministries; Roy through agriculture and Aleta through public health and visitation, in order, ultimately, to share the good news of Jesus the Messiah with them. CAR is one of the least developed countries in the world and is currently in continual crisis (since the coup in March 2013), so reaching out in compassion is key to reaching their hearts. Due to the ongoing conflict and resultant ethnic cleansing in CAR, we are crossing the border to interact with our Fulani contacts.
View all posts by danforth →
This entry was posted in Ceremonies & church happenings. Bookmark the permalink.