Once again we want to reiterate how much we appreciate your prayers. This weekend was a reminder of the power of prayer. Some of you who know me (Katie) know that in the past couple of years I have come to dread flying. There’s no rhyme or reason to it, but it simply makes me anxious. I don’t like to feel the plane bouncing around in the turbulence or hear the pilot say things like “computer problems.” Well, this weekend my good friend Diana and I boarded a plane in Medellin to head out to the south coast to lead some workshops. It was a small plane (30 seater), which makes me even more nervous, but I took comfort in the fact that it’s a short 40 minute flight and I had great company. The flight was relatively smooth and Diana and I found lots to talk about. I didn’t even notice that we had been in flight much longer than 40 minutes, when Diana remarked that we should have landed by now. At that moment the pilot came on to say that we had problems with our landing and that we were supposed to follow every instruction we were given. Just then the flight attendant began to give instructions for how to position ourselves for an emergency landing. I actually could barely understand what she was saying as there was so much noise and the microphone wasn’t working great. Diana and I were in the front row so there was no seat in front of us to hold on to. We were simply supposed to grab on to the seat under our knees and bend our head and shoulders down. But then there was repeated instructions to make sure we knew where the emergency exit was.  It was very clear that when she told us to get in our positions we were to do exactly as she said.

All calm was gone. Diana and I looked at each other and started praying. What in the world was happening? What was going to happen? Just then the pilot came on again saying the airport was waiting for our arrival and had been informed of our situation. Fire engines, fire fighters, paramedics and ambulances were waiting to attend to us. We knew then that the situation was not good. We simply continued to pray. We could feel the plane descending and simply held the position we were told.  We committed the situation to God, trusting that he was with us. We kept praying and praying and praying. And then the plane touched down. It jerked and quickly the pilot put on the breaks. It seemed like an eternity before the pilot came on and said, “We’ve successfully landed. Please remain seated and wait for further instructions.” As we looked out the window we saw firefighters in special gear walking towards the plane. We saw the fire trucks and ambulances. 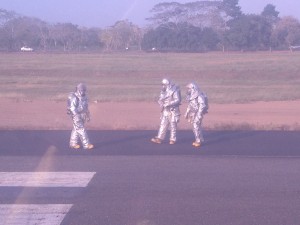 Fire fighters who greeted us

The flight attendant came to make sure everyone was alright. The plane could not make it to the gate so they sent taxis out to the runway to pick us up and take us to the airport. As we talked with the flight attendant we asked what had happened. She explained that the landing gear was not locking in place, so the pilot did circles around the airport for 40 minutes burning off the gasoline to try to prevent an explosion. Our 40 minute flight turned into an 1.5 hours flight. Luckily at the last minute the landing gear did lock. She also said this was her first experience like this, and then added “These situations typically don’t end well.” Diana and I hugged each other and thanked God for his protection over us.  We were happy to get off of the plane, even if we were greeted by men who looked like astronauts. We got into a taxi that took us to the baggage claim where we got our one bag and headed out to find Pastor Franklin who was waiting for us. We were grateful to be on solid ground, and even grateful for the 30 minute motorcycle ride on the unpaved road through the cotton fields to the church in El Hato. I couldn’t stop thanking God for the opportunity to breathe in the fresh air and head out to the next adventure. The weekend was a wonderful time of visiting churches, hearing the stories of faithful Christ-followers, teaching and encouraging children’s ministry leaders (Blog update to come). We cried a little just trying to process the shock we had experience, but we also laughed a lot about the experience. Sunday as we boarded the plane again, I knew it was because of the prayers of the people that I felt complete peace. “O most High, when I am afraid, I put my trust in you. In God, whose word I praise, in God I trust; I am not afraid.” Psalm 56:3-4. There is no shortage of plane rides in our future, so we continue to ask for your prayers for God’s protection and for peace of mind and heart as we travel. 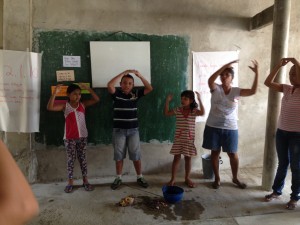 In San Carlos being taught a song by the children