On the flight, people were talking about Paul Carlson. He returned to Wasolo Hospital because people needed him. People at Wasolo tried to help him leave by back paths and a canoe, but he didn’t go. When rebels came, it was no longer his choice. People remembered his sacrifice. I sat there uncomfortable. That was then. Today, we evacuate missionaries when things get that tense. It’s not an individual choice. We talk ahead of time, lay out a contingency plan, and are expected to agree if we want to keep working in Congo. Our culture has changed. Sacrifice like that comes when we do our best planning and still the danger comes. 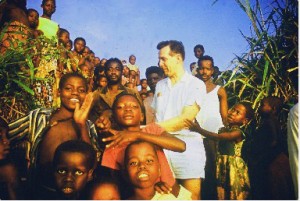 Paul Carlson died. Others survived the rescue. Random or planned, that’s too hard to debate.  It happened. Not as a model for how to do mission. It just happened. It was so hard for his family, his children. And hard for Wasolo people who had wanted him to live and work with them. Hard for colleagues. His death changed us and how we did mission, what was acceptable risk, when to stay and when to leave.

But it is still hard. Difficult to leave when others cannot go. Uncomfortable privilege some have, others do not. There are always the calls for Radical service, more than I want to give, others imply our giving is not enough.

What has happened since Dr Paul died?

In the country, there was turmoil. Civil wars need years of recovery time. Independence is heady. What version and leadership replaces the foreign rule, vying for power until one person stands out, takes over. Looking back, the sham elections chose the dictator. The Church in our area saw him as one of their own. He did give help. He held the country together. He spoke well.

Mission decisions were how to put staff in places where they could do the most good and also be good for the families. Not many wanted to go work there. There were local interpretations of why that was. Wasolo rumor was that since they had allowed Paul to die, they didn’t have another doctor.

There was unrest in 1960, 1964, 1991, then war in 1996 and 1998. In our own country, we hear political talk. We have friends with whom we choose not to discuss elections or policies. Some of us have protested with signs that hold little hope without change. Our home churches can become less comfortable as we grow up. What shows us that life is now good, better or worse?

In Congo, I asked one Sunday if life was better now than in 2003 when the war ended.  Most people said “No.” But I saw more people sending their kids to school, more bicycles and motorcycles, more than one set of clothes per person, fewer soldiers, more trucks buying produce, more local projects, radio stations, cell phones. Not as good as it used to be, but still better than 2003.

Families and churches, towns and countries. We raise our children and make our laws based on how we grew up and what seems best now. That’s how we do mission too. There are strong voices which change our ways. We do adjust to what many others are doing. Better education. More medicine. Replace vehicles. Discipleship matters. Best practices for aid. Holistic, organic, faith-based, transformational development. It’s good. It’s necessary. It’s how we go forward.

Church and mission. It’s living and surviving together. Choosing what to support. Praying and worshipping. Agriculture and technologies. It is living all of our complex wonderful lives together. In faith. In Christ. Not guaranteed that we’ll get it right or that we chose the right politics. But confident that God is at work.

Paul Carlson was in Congo for less than 2 years. Like any of us, his language skills at that point were OK, not great. He was still working, growing, learning. It was not easy for his family. But they agreed to be there.

Covenant World Mission has been in Congo for over 75 years. It’s hard to imagine what the area would be like without its presence, without the Church. Many people say “this is our church”. Our home. God is at work.

The difference is a community connected to Covenant churches. And a North American Covenant Church that needs Congo believers. We see faith lived out near and far. Projects done, some lasting, others long ended. That’s life together. How we work. Why we all keep on. Belief that God has made us brothers and sisters, even when the project is done. That’s why I want us to live together, so that we don’t forget that we are family. We are.