The El Pinal Hope for Life Covenant Church in Medellin is in its last month of ministry. Or is it?

You see, the city of Medellin decided that the location of the church building is in the route of its new mass transit system that will serve the Comuna Six section of the city. About a year ago the city of Medellin began seriously studying the exact route of the new mass transit system (which is very needed in this section of the city and which will serve thousands of people) and so the Hope for Life members knew that they could lose their location. They prayed about it as a Church and were hoping that the city would decide to put the route on the other side of the street. But, that was not the case. Two months ago they found out that the city would make them “an offer they couldn’t refuse” for their building in December.

The Hope for Life Church began its ministry in 1993. In the last 20 years it has never had a church membership that has come close to 100 members at any one time, yet, it has ministered to hundreds of families and thousands of individuals. Always adapting to the needs of the community, and trying to evangelize its neighborhood, Pastor Javier Gomez, and the congregation, have expanded their building to fit the needs of ministry to where it is now five times its original size.

Nine years ago a neighborhood fire destroyed 700 homes and the Hope for Life Church became very involved and integral in offering hope to the families and neighborhood. They worked with Covenant World Relief and began to address the needs of the families who lost their homes and the children who became the largest group of innocent victims. Without much to go on, besides knowing the situation that needed to be addressed, the Church began ministering to more and more families by working with their children. Through programs of Compassion International, and now, through the Buen Comienzo (Head Start) Education program for 1-4 year olds, Hope For Life Covenant Church has been the center of Hope for the El Pinal neighborhood. 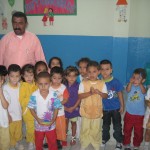 The city of Medellin actually made a good offer for the building and Hope for Life was not going to refuse it. In fact, they are considering using the money to expand one of their daughter churches, that is located somewhat close by, in the Freedom neighborhood, and continue to pursue bringing Hope for Life to even more children, families and individuals.
When Mary Lou and Gary were at the Church for the final service of 2012, it was a service of celebration, of community, of remembrance, and of looking forward with anticipation (and a “little” trepidation) to what God has in store for them. We think that God has even more blessings to bestow on this small church – BIG community based family of God.