For the past four years, officially, the Covenant of Colombia has been trying to break away from a tradition of working together through a “gentleman’s agreement.” This “gentleman’s agreement” was first talked about 20 years ago and put into place 17 years ago, after the first Covenant Church organization divided and disintegrated. The gentleman’s agreement basically said that until a new Covenant Church organization was formed and was legally recognized by the Colombian government, all current and future Covenant Churches would seek their own official licenses and agree to work together, support one another, seek the common good together to expand the Kingdom of God and extend the Covenant throughout Colombia. It was a momentous decision, in 1996, and was duly celebrated. But, this gentleman’s agreement faced many challenges—one of which was that it became the modus operandi and the “tradition” which guided the Covenant. The last verse in the book of Judges, Judges 25:21, says, “At that time there was no king in Israel. People did whatever they felt like doing.” That verse fulfilled the Covenant theme, “where is it written,” and seemed to be the biblical proof text for how the Colombia Covenant began to relate to one another. The gentleman’s agreement was so broad and encompassing and flexible that it was hard to hold together. It depended on the good will of each Church to abide by it and when push came to shove, or when there was a disagreement, each one did what they thought best.

Even though this challenge was present, the Covenant more than tripled in the number of Churches planted, social action ministries started, and extension in the country. God was moving in and through the Colombia Covenant. Still, there was a need to have everyone be legal, as stipulated by the Colombian government. Because of the “gentleman’s agreement tradition” it took a miracle to get enough Churches (four of them) to form the FEDERATION OF COLOMBIA COVENANT CHURCHES – FIPEC in 2009.

And for the past four years Alvaro Escallon has led the official organization of the Churches, helping the majority of them to secure their own operating licenses (currently more than 35). At the current time, all but one Covenant Church has its license—but not all of them are a part of the Federation. That is because a constitution guides the decisions made by the Covenant of Colombia and a constitution looks out for the Covenant. Under the constitution, the gentleman’s agreement is no longer valid as a guide for Covenant and under the constitution, only those Churches which abide by the constitution are accepted into the Covenant – FIPEC. Every Church has had more than four years to “break” from tradition and join the Federation and be more committed to one another. But for some of them, it is hard to leave their independence and become interdependent.

Alvaro Escallon finishes his term as the first president of the official federation – FIPEC in May of 2013. Javier Gomez was elected as the new president for the next four-year term. Alvaro brought the Covenant very far in the last four years. Javier’s task is to consolidate everything and to keep the focus on church planting, kingdom extension and pastoral/leader care. Quite a task, especially for Javier, who was a champion at sticking to the “old tradition” and fulfilling Judges 25:21. But, God has done some wonderful things in Javier’s life through the years, and he is now a champion of the FIPEC Covenant of Colombia. We think that the next four years will be another testimony to God’s blessings in Javier’s life. 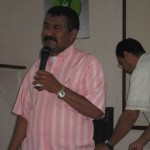