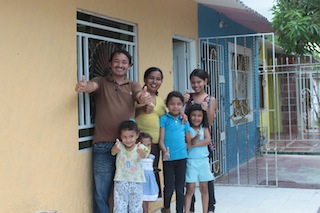 2011 has been a year with less rain, so far.  But, 2009 and 2010 set records in Colombia with the amounts of rain.  One of those locations which was receiving large amounts of rain was Barranquilla, specifically, the 20th of July neighborhood where the 20th of July Covenant Church is located.  What increased the concern for many of us was that Pastor Anderson Ortega and his wife and five daughters lived in the Church building, which was right in the way of the flooding run-off (the top left picture shows the flooding damage in the Church parsonage.  A campaign was started to get Pastor Anderson and his family to higher ground.  Pastor Anderson began to look for house options, the Lakehills Covenant Church took a special Christmas eve offering, a Norwegian Covenant family gave a gift, and things began to come together.  Last Sunday evening, Pastor Anderson and his family were able to move into a new house!  We were able to celebrate God’s goodness with a “toast” of Apple soda with the Ortega family.