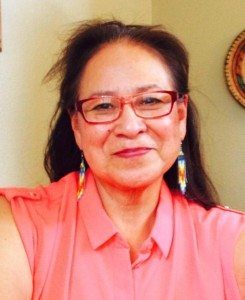 On the one hand, Thanksgiving is another example of dualistic western worldview thinking on the secular and the sacred. Picking out an annual day to mark thankfulness is much like the Christian missionary appropriating the Lakota language to designate Sunday as the ‘holy day’ of the week. In indigenous thinking, one acts and thinks the same way, every day, in all places, in relationship with Creator, each other, and all creation.

On the other hand, gathering for Thanksgiving today can affirm and strengthen the family relationship, in a time of listening, learning and laughing together. (In the indigenous worldview, laughter is sacred too). In Lakota culture, thanksgiving is seen in wopila (gratitude) ceremonies offered at the end of the summer season, or at the end of a one-year period of mourning when the life of the departed is celebrated with a give-away.

I like to think of expressions of thankfulness as part of the life cycle in the context of shalom in creation, as found in the Hebrew creation stories of Genesis 1 and 2. Genesis 2:7, “The Lord God formed the man from the dust of the ground and breathed into his nostrils the breath of life, and the man became a living being.”Adam and the animals were formed from the same adamah (land). Since man was formed from the earth, in a relational sense, earth is man’s mother. The Lakota creation story says that we were once subterranean dwellers and emerged in Paha Sapa, the Black Hills. We call earth Unci Maka, Grandmother Earth, to reflect a deep and respectful relationship.

This context of shalom in creation is foundational to the indigenous theology of the land, which is a worldview that is not found in the western worldview. Native creation stories connect tribes to specific homelands, giving them identity and responsibility to a place in creation. Author and Native theologian, George Tinker (Osage/Cherokee) wrote, “Native creation stories are our history of experiencing the Christ as Creator who communicated healing and salvation to all his creation.”

In Lakota, there is a prayerful expression, “mitakuye oyasin,” which means  “we are related to each other and to all of creation.”  It’s a worldview that all creation is sacred, in a shalom relationship ordered and designed by Creator Jesus. I think of the promise that God made to Abraham, Isaac and Jacob, (Gen 28:14) “Your offspring shall be like the dust of the earth, and you shall spread abroad to the west and to the east and to the north and to the south; and all the families of the earth shall be blessed in you and in your offspring.” That sounds like we are all related by original design.

Lakota philosophy teaches that humans are created with the capacity to create and destroy, that we have a will to maintain a balance between the two, and that we need to seek restoration of harmony when right relationship is broken. Indigenous expressions of seeking restoration are often through ceremony and include thanksgiving to Creator.

For the Native who follows the Jesus Way, true Shalom is found in Creator Jesus, worthy of all thanksgiving.