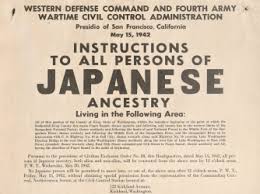 On December 7, 1941, Japan attacked Pearl Harbor in Hawaii. From this singular event came countless implications, including systemic discrimination against American citizens of Japanese descent. General John DeWiit, not long after the attack, wrote that “The Japanese race is an enemy race and while many second and third generation Japanese born on United States soil, possessed of United States citizenship, have become ‘Americanized,’ the racial strains are undiluted.” President Roosevelt would differentiate between immigrants from the European nations within whom our nation was at war and those who had come from Japan who, unlike the European immigrants, required “mass evacuation on the west coast.” In other words, the Japanese were singled out racially, seen in contrast to other immigrants as perpetual foreigners who could not be trusted. As a result, between 110,000 and 120,000 Japanese-Americans were forced into internment camps during World War II. When they were eventually released, many returned to their homes to find houses damaged and fields destroyed.

What happened after the war? Were these American citizens expected to return to normal? To act as though their imprisonment had never happened? What about their neighbors? How were they to engage with their fellow citizens on the other side of this injustice?

How does reconciliation happen when the injustice that first caused the division and suffering isn’t acknowledged or addressed? What is the relationship between reconciliation and justice?

Reconciliation within diverse community is incredibly important. Why? Because when the Son of God was crucified he reconciled us to God and to one another. The old lines of separation are an obstruction to the church’s witness to the Gospel. When Jesus said that our unity would show the world the Father’s love, he actually meant it. Why is reconciliation so important? Because the gospel is so important!

In the Old Testament righteousness and justice come from the same word having to do with meeting a standard of rightness. Ultimately God is that standard. God is righteous. God is just. For the Lord is righteous, he loves justice; the upright will see his face. [Psalm 11:7]

This is why the Apostle is so enthusiastic in Romans 3 and 8. Justice has been won for us by Jesus: God presented Christ as a sacrifice of atonement, through the shedding of his blood…[Romans 3:25] 38 For I am convinced that neither death nor life, neither angels nor demons, neither the present nor the future, nor any powers, 39 neither height nor depth, nor anything else in all creation, will be able to separate us from the love of God that is in Christ Jesus our Lord. [Romans 8:38-39]

Our unrighteousness has been dealt with, both within our hearts and through the defeat of our unrighteous enemies. Through Jesus’s death and resurrection justice has been accomplished. The enemies who waged war on God’s precious humanity have been exposed and defeated. Their days are numbered and their power has been leached.

Justice is not the jargon of the radicals nor is it a program for the ideological. The justice of our righteous God is our salvation, our hope, and our healing. The justice won by Jesus will win the day, renew the creation, and establish forever a kingdom of righteousness. We are reconciled to God because God’s justice has been accomplished. So again, as Christians we must say: There can be no authentic reconciliation without justice. Reconciliation requires justice.

Attempts at reconciliation that don’t address injustice are deceptive, manipulative, and oppressive. Such so-called reconciliation has far more in common with colonialism than it does with Biblical righteousness. This is why the Japanese Americans who were interned didn’t have access to genuine reconciliation when they returned from the internment camps. They were expected to return to being happy American citizens and good neighbors while the trauma of their plunder and imprisonment was whitewashed from history. That began to change in the late 1970’s when, inspired by the Black Power movement, some Japanese activists began to dig into this injustice. In 1980 congress appointed a commission who found the interment camps were a result of “racial prejudice, war hysteria and the failure of political leadership.” A year later a bill was passed apologizing for the internment camps. The commission had called the camps a grave injustice and President Ronald Reagan, when signing the bill, called the event “a grave wrong” and a “sad chapter in American history.” The bill provided $20,000 of reparations to each survivor, an act that represented this country’s attempt to tell the truth about injustice and to address the tangible losses suffered by its citizens. It also set the stage for genuine reconciliation because justice had finally entered the equation.

And because reconciliation requires justice, we will be inconvenienced in the pursuit of reconciliation. For many of us it is not the idea of justice that keeps us from reconciliation but the inconvenience of justice. We think about justice- read about it, have opinions about, and post to social media about it. But do we do justice? Belonging to a church or denomination that values justice is not the same as doing justice in the pursuit of Gospel reconciliation. We are not just by association. After all, securing justice for us was profoundly inconvenient for God. It cost God. God sacrificed and suffered so that justice could be won for our salvation.

But the inconvenience of justice is more than worth it! As we pursue justice and give ourselves to the work of reconciliation we experience the truth that we have been justified freely by God’s grace; that our sins have been cleansed by Christ’s blood; that God is for us and so no one can be against us; that God did not spare his son for us; that no charge can be brought against us because God’s justice has been applied to us; that no one can condemn us because Christ’s righteousness has covered us; that the Son of God sits at the Father’s right hand interceding for us; that nothing and nobody can separate us from our Savior’s love: not trouble or hardship or persecution or famine or nakedness or danger or sword; that we’ve been made more than conquerors by the God who loves us; that God’s reconciliation is unbreakable and inseparable- not by death or life, by angels or demons, by our pasts or presents or futures, by any height or depth, not by anything that has ever existed in creation.