Special thanks to River Ridge Covenant Church in Olympia, WA for    their generous gift that has enabled the construction of a new water    tower for the greater Bokonzo neighborhood.  AND thanks to Joel    Birchman, retired engineer, who donated loads of energy and    expertise to the construction during his 18 days with us in Feb. and    March.  Joel was a real ‘trooper’ through the excessive heat and    humidity as he counseled and encouraged the masons on the project.     Joel’s mayele (wisdom in Lingala) also helped them figure    out how to ‘shore up’ leaks in the old water tower using a brace    system.  Lord willing, there will be double the amount of clean    water available soon.
In his spare time, Joel delighted kids at the orphanage and    elsewhere with gifts of balloons and frisbees.
Though the plumbing supplies for completion of the project arrived    after Joel left, we’re thankful for ALL Joel accomplished on the    towers and in impacting lives with the love of Christ. 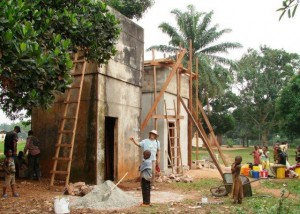