Neighborly Care – Toward Us! 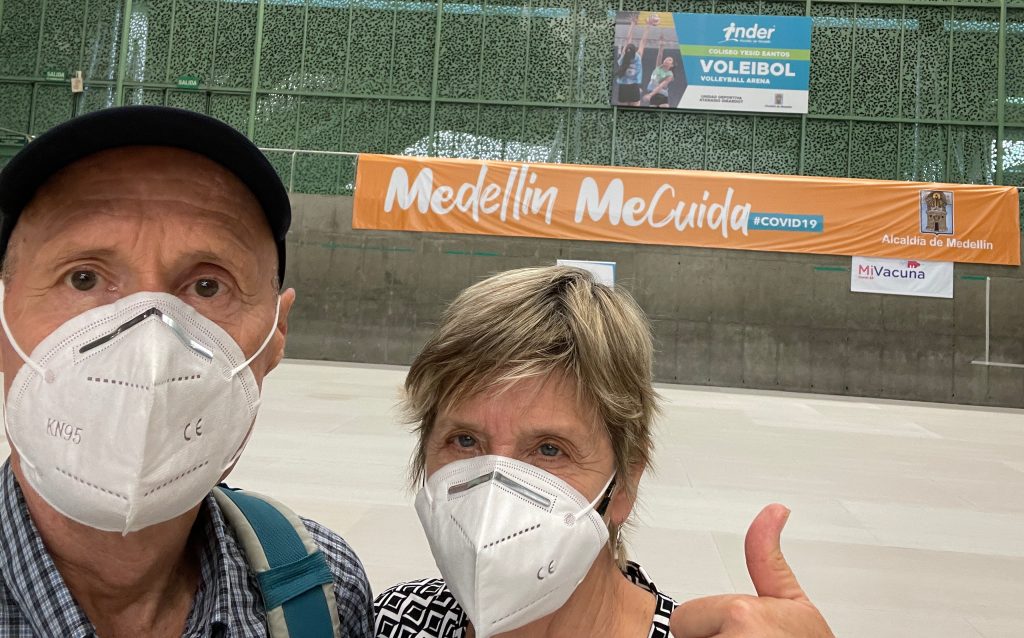 A friendship began between Gary and our neighbor, Hernan, last year as they exercised in our neighborhood because of the quarantine restrictions. Gary found out that Hernan was a retinologist/eye surgeon and told Gary that anytime he needed eye care, he could take care of him.

Fast forward to this March when Gary noticed that his vision was blurry, and his contact lenses weren’t helping. Gary walked to Hernan’s house, hoping that Hernan could help him get new lenses. Hernan offered to take Gary to his clinic to get his eyes checked out. That week Gary enjoyed the door-to-door service from Hernan and had his examinations. He found out that he had cataracts in both eyes and needed surgery. Unfortunately, Colombia went into a strong surge of COVID cases and began shutdowns and quarantines putting Hernan’s neighborly care for Gary on hold, or so we thought.

Two weeks ago, Hernan called Gary saying he was coming home for lunch and asked if he could meet him. Hernan had put Gary on the list of surgeries and his turn had come up. If he still wanted to get his eyes fixed, Hernan could do it that week. So, by Saturday, Gary had two new lenses in his eyes, and it was Hernan who performed both surgeries. Mary Lou was so impressed that she asked Hernan if she could get her eyes looked at. When Mary Lou took Gary to his follow-up appointment, she walked into the clinic and immediately was escorted into an examination room. She left the clinic having placed an order for glasses and so thankful for our neighbor, Hernan, and for the way he had organized everything!

This past Sunday the neighborly care continued! With the COVID cases in Colombia rising along with the increased risk of infection, we were praying to receive the COVID vaccinations. However, as foreign residents without Colombian health insurance, we found ourselves “outside” the system.

A highly placed government official is our neighbor and over this past year we have gotten to know he and his family. Two months ago we spoke to him and asked if there was anything he could do on our behalf. He quickly assured us that getting everyone vaccinated was a priority for him. He asked his personal secretary to work on how to get us registered. We, too, were monitoring when our age group would be called for their vaccinations, fully knowing that we didn’t have an appointment and trusting that our neighbor was true to his word…and he was!

On Mother’s Day Gary received a call from his secretary, because she had just heard that our age group was being called to begin their appointments. She told us where to go and receive the first dose. But we had a problem.

We had been without internet, telephone, and television service for five days and the service technician was coming at any moment. How could we leave? We didn’t want to cancel this visit and we didn’t want to miss out on the vaccine. Gary spotted Andres, one of the government official’s security detail, who had become our friend, and asked if he would do us the favor of taking care of the technician when he arrived. (If you can’t trust the government security, who can you trust, right?) Andres said “of course, whatever you need”, and we left our house key with him, and headed for our vaccine.

Arriving at the vaccination location, without having the ‘all-important appointment’, at first the system would not let us register. We talked to one assistant, who took our case in front of the head organizers and 30 minutes later we were in front of a computer having our data entered into the system. And 30 minutes after that we left having had our first vaccination! When we arrived home, Andres gave us a smile and a detailed account of the technician’s successful visit—complete with photos of the technician and what he did!