The last two weekends Mary Lou and Gary have been with the pastoral couples in the South Coast Region and in the Cundinamarca Region working with the theme of forgiveness. Forgiveness is a common theme spoken from the pulpit around the world, and in the Covenant Churches in these two regions, but that doesn’t mean that it isn’t a theme that needs more work. The ones that are talking also need to be the ones who are living it out. So we approached the theme and worked through it from many angles, reference points, experiences and actual problems taking place. It was surprising how willing all of us were to hang in there and work through the material. Between the two regional meetings, 25 hours were spend talking, sharing, confronting, praying and talking some more. And it is not done yet. Follow up will need to take place. 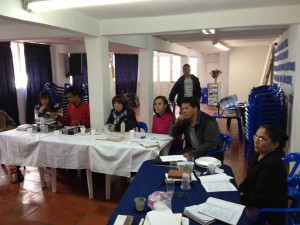 But, big steps were taken by one and all. That is to say, one and all learned something in the past two weekends about forgiveness, about loving our neighbors and about loving ourselves. By doing all of that, we all learned something about loving God. Tensions, stresses, life and ministry challenges were arising and causing some pastoral “family” members, those who were a part of the Colombia Covenant ministry community, to not get along. They were getting stuck in their feelings of being justified in their positions and opinions. It was actually a bit humorous when we began to speak about forgiveness and those in attendance began to make sure that they were sitting at tables. We moved furniture and found tables so that everyone could be sitting behind one. But, at first it wasn’t that they wanted to be at a table, they wanted to sit behind barriers—for protection, for security and for separation. After God started moving, the barriers turned to tables where everyone laid it all out—what they had been holding back, what they had never confessed or said to one another, and what they needed to do to love God, their neighbors and themselves.

We will need to return to the tables again to keep working on being a community, to keep forgiving one another and being forgiven. But God has turned the tables they will remain just that, a place to lay it all out, and won’t turn to barriers any time soon.