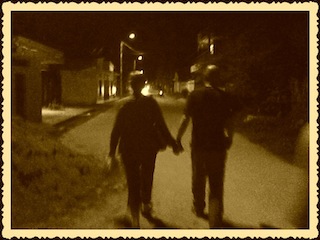 The photo was taken late in the evening in the town of San Marcos, Sucre, Colombia, as Mary Lou and Gary were returning to their place of rest for the night.  Our good friend, Debra Gordon, took it, a three-time member of the mission team that the Bayside Church in Granite Bay, CA, has been sending down to partner with the Covenant in Colombia.  Six people from the eight-member team had traveled about two hours and arrived in San Marcos early in the morning, after spending four days in three Covenant Churches in the city of Monteria.  The San Marcos Covenant Church and community, as in the other seven Covenant Churches and communities that the team ministered in, received training in lesson preparation for their children’s ministries; interacted with the team members and shared life stories and insights into God’s activity and revelation in their lives; and received training in putting together a Celebrate Recovery ministry in their community.  (The other two members of the team were on a special assignment assessing how to of reinvigorate and restart the Nutrition and Education Center for Children “CRENN” program in the largest refugee neighborhood in Colombia that is located in Monteria.)

Mary Lou and Gary, along with fellow Covenant Long term missionary, Cathy Campobello and Bayside team member, Rosa Barrios, provided the coordination of the 12 day trip and the interpretation for the team.  Mary Lou and Gary, were also able to continue their ministry with the pastoral couples in this region, making sure to spend special time with each pastoral couple, even staying in a few of their homes.  Tomorrow they return there for a regular time together with all of the pastors and spouses.

Now, granted, at the end of every day of ministry here in Colombia, Mary Lou and Gary don’t walk down the street holding hands (although we wish that it did).  They do make sure that they touch base with one another before the end of the day, so that they know what the other is going through and how to best encourage each other and pray for each other.  But, it was nice that Debra caught them walking down the street in San Marcos holding hands.