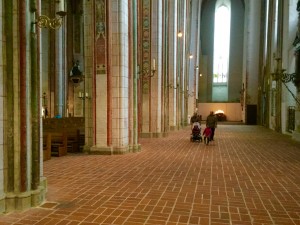 When we had visitors in October, we drove for the first time to Lübeck, a great little city near the Baltic Sea. The city is situated on an island. In the middle of the island is a beautiful 800-year old cathedral, St. Mary (Marienkirche). We were greeted by the receptionist and were asked to pay admission to enter. Some people paid the money and others turned around and walked out. We decided to pay and took a self guided tour.

We learned some very interesting facts about the church during World War II. During the war, the Nazi party confiscated church bells and melted them down to use the metal for weaponry. Not only in Lübeck but it many German occupied cities.  But the bells in this cathedral had a very different fate! They fell from the ceiling and shattered during the fire of 1942.  The church is most know for this to locals and tourists alike.  One other notable thing was how the pews were laid out.

The pews were completely destroyed when the naive was bombed. This stirred up many emotions for us. At one time, the entire church was filled and possibly needed more seating, but now, no one sits down except the occasional weary tourist. The church literally looked half empty. Even though the naive was completely rebuilt, the decision was made not to replace half of the seating. This experience spoke loudly to us. It spoke of the history and the rich context of what was. It spoke of the lack of interest and post-Christian context in which we live and work. It speaks of the need for replenishment in the hearts of the people in this dry land. It speaks to us personally, as a calling to reach further and invest more in people and not in things. The church will always be the church but will the people be the people?