How different times are now… 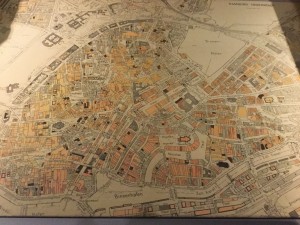 During month of October, we had many guests! We were glad for the opportunity to see and connect with many people we care about. We enjoyed sharing life with friends and family, if only for a short while. We especially enjoyed inviting people to experience our work in Germany and get a better understanding of why God is calling Christian workers to Germany for “such a time as this.”

One of the great things about having visitors is we get to show them around the city of Hamburg. Very often we take them to a WWII memorial located at the remnants of St. Nikolai Cathedral. This church was badly bombed during WWII and now the only intact portion is the alter (out in the open air), portions of the walls, and the spire which is under constant construction. The “inside” of the church is completely open to the elements and is chillingly beautiful. In the catacombs, there is a museum about the war and bombings in Hamburg.

We have been down to the museum three times and each time, discover new things. This time in particular, We came across an interesting plaque. The plaque described how the war affected the people of Hamburg. The last two sentence moved us to tears: “The bombings put the people’s relationship with God through an acid test. In the course of the events from 1943, many people not only lost their homes and families but also their faith.” Reading this sheds enormous light on the current fragile state of the church in Germany.

In many ways, each new generation of Germans believes they are something of a “post-war generation.” This is because the public schools here teach 6 years of GERMAN history to students, drilling into them the severity of the Holocaust in an attempt to prevent anything like it from ever happening again. The result seems to be that the wounds of the war remain open and fresh. Many Germans are still ashamed of what happened as if they were the ones themselves there. What’s worse is that because Hitler and his regime were “Christians” and in connected with many clergymen, (church and state are not separate here) people identified their crimes against humanity with the Christian church. As a result, large sects of the church in Germany died with the war.

But we do not lose hope, and neither do our Christian brothers and sisters here! Praise God that He is in control and that there continues to be a remnant of faithful believers in Germany. There are very dedicated and true Christians in Germany and we are so proud to work alongside them. We have much work to do and dry, rocky soil in which to do it. So we encourage and ask you to pray for us and the harvest workers in Germany and throughout Europe. When you hear stories or see reminders of German culture in your everyday life, stop and pray for us and the German people. We know our God is willing and able to work with the faithful remnant to build (and re-build) His kingdom.