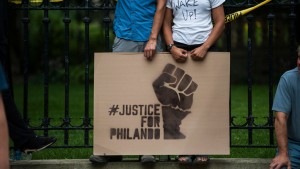 I once wrote an entire blog post about cheese toast. Okay, it wasn’t as trivial as it sounds. It was a reflection on how eating cheese toast as an adult always takes me back in time to my childhood. The look, the smell, the taste of the toast always brought to mind specific childhood memories. In fact, just writing about cheese toast brings up those memories. At this point, I’m sure you’re thinking about what foods trigger some of your most cherished memories. And you’re probably wondering what this has to do with lynch mobs. Many things can trigger memories – a scent, a sound, an image, a song or an emotion. In early July, my emotions triggered a memory. But it wasn’t the memory of a lived experience, it was more like I tapped into the collective memory of black people from years past.

On the morning of July 7, 2016, I woke up to the news that another unarmed black man (Philando Castile) had been killed by a police officer. This was right on the heels of the killing of Alton Sterling. They were two of a countless number of black men and women whose lives have been cut short in recent years due to the fact that they were black. That morning, I found myself experiencing what can only be described as terror. The reality I faced in that moment was this: my life is expendable, simply because I am black. I could be assaulted, raped or murdered, and the system would favor my attacker instead of me. Even worse, my family is susceptible to the same fate, and there is absolutely nothing I can do about it. It was at that moment that I felt a memory rising up – a collective memory. Just like cheese toast immediately brought up childhood memories, this state of terror brought to mind the “black experience” of years past.

This state of terror was the same state of terror that black people had lived under during Reconstruction, the Jim/Jane Crow era and the Civil Rights era (though I could also argue that it’s never gone away). They did their best to go about their lives as if things were normal – go to school, go to work, go to church, go to social events. Yet, their behavior was governed by the knowledge that one wrong word or move or breath could cost them their lives at the hands of lynch mobs (which often included officers of the law but could also be civilians with no connection to law enforcement). Often, black people were jailed under false accusations. Before they could have the fair trial promised by the sixth amendment, these men, women and children – most of whom were innocent – were snatched from the jails by vigilante mobs and lynched. This is the collective memory that has been handed down to me through history books (and DNA, as more recent studies have shown). However, in addition to the collective memory, I have my own personal memories of times when I feared for my well-being because I knew I was in a place where black people were not welcomed. Those places existed in the South but also in my own hometown of Chicago and other places throughout the North.

Like those who came before me, I do my best to resist being overwhelmed by this terrorism, though it engulfs me. I rebel each day when I make the conscious decision to go out into the world with my head held high. This experience helps me better understand the motivation of Freedom Fighters like Ella Baker and Martin Luther King, Jr. They weren’t fighting for the right to sit in the front of the bus or at a lunch counter, they were fighting for the right to exist outside of a state of terror. They were fighting for the opportunity to not just live or survive but to thrive – and to thrive without the fear of having the fruits of their labor taken away, burned down, etc. (e.g., Black Wall Street, Rosewood, etc.).

When we dig into the history of our nation, what becomes evident is the fact that people of color have all experienced (or are currently experiencing) some form of this terrorism (e.g., deportation, boarding schools, internment camps). It is a state of being created by and supported by the system of white supremacy. (For the sake of clarity, the term “white supremacy” refers to the system of structural racism that is supported by things such as inequitable laws, white privilege and the notion of “whiteness.”) While we all keep hoping for peace; as long as that system is allowed to stand, I will continue to fight.