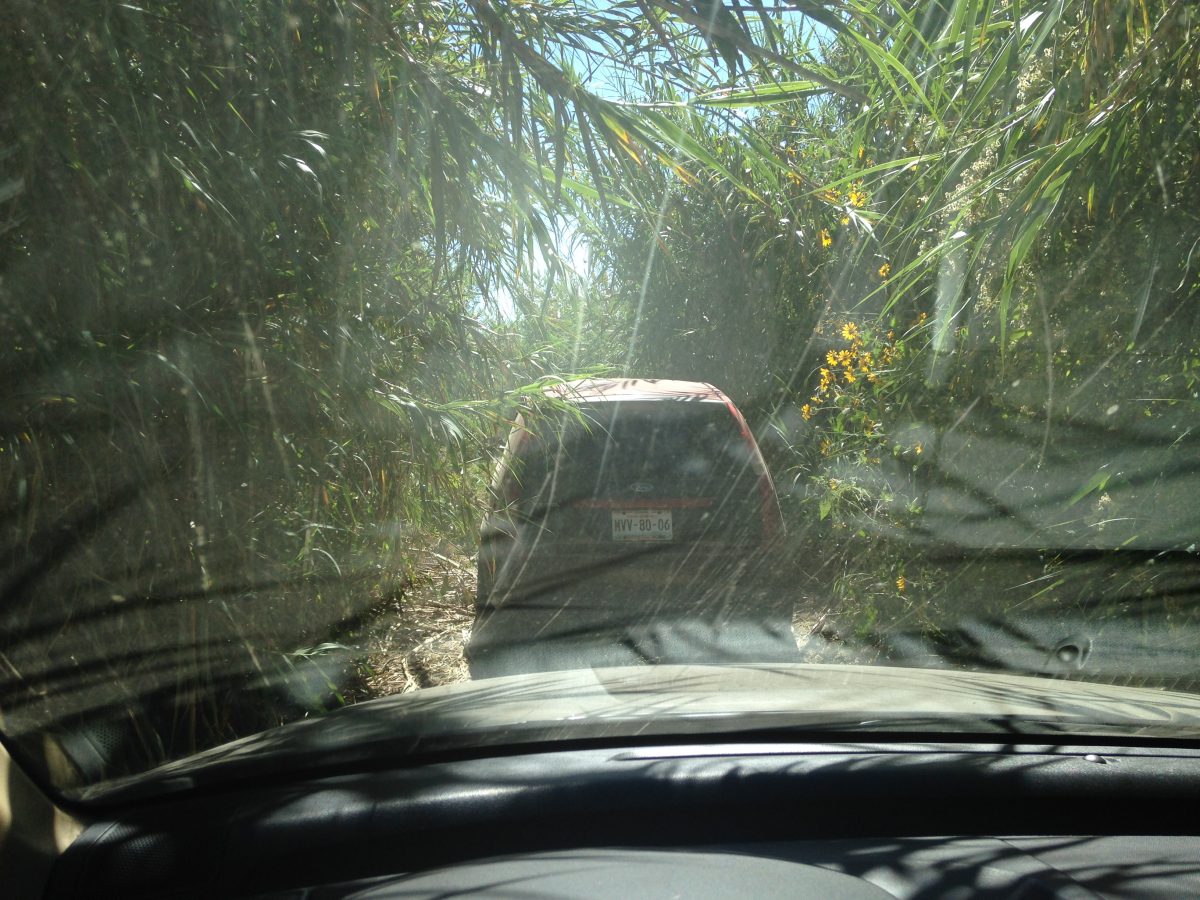 An unforgettable day filled with God’s love, blockades and a visit to the women’s prison

We left the house at 7:40am on our way to school knowing that there were several blockades throughout the city, but usually that just means more traffic since the main road leading us to school is rarely blocked.  However, this morning it was, and traffic was terrible.  As I tried to go an alternate route, the police officer told me I couldn’t get through.  After about 45 minutes of driving what would have normally taken us only 5 minutes, I was about to give up.  I called Nils and he encouraged me to give it one more try, so instead of looking for an alternate route heading toward the school I looked for one heading away from school. I opened up Google Maps on my phone, which isn’t always accurate here, and starting looking for a way around the blockade.  I started off on a road that seemed to go through to another main road, but ended with stairs heading up to the other road.  In the states, I would have taken that as a dead end, but here is another story, the police officer encouraged me forward and I drove up the stairs and onto another road that took me farther away, outside of the city, on a very dusty dirt road along a canal that only got narrower and narrower and bumpier and bumpier.  The weird thing is that I didn’t see any other cars going this way, which always makes you a little suspicious because even though Google Maps said this road goes through, you never really know if it’s true until you make it.  As the tree branches and leaves started scraping up against our car, I was wondering if this was such a good idea…

Then, all of a sudden there was a clearing, and a taxi was heading straight towards me, which was great! (because I could ask him if there was “Paso”, a way through at the end of the road) except, how were we both going to fit on this narrow road (little did I know I would be in this situation about 5 more times that day)?  Well, he was able to pull way over and let me by, and we both rolled our windows down and asked if there was Paso, to which we both responded affirmatively.  He told me in 200 meters there would be a bridge which would cross the canal and take me to where I needed to go, but that this road was going to get even more narrow!  Hard to believe, but it was true, and with several more scratches, we finally made it to a normal paved street and to the bridge, and after 1 hour and 20 minutes in the car (the trip to school is usually 20 minutes), we made it to school!

Now, normally, I would have given up much sooner, but today was a special day.  After dropping the boys off, I was to meet up with Raquel, Julianid and Jaime and we were all going to go out to the women’s prison about 30 minutes outside of the city to celebrate the conclusion of the Mending the Soul course that they had been facilitating since April.  However, they too were battling other blockades as they were coming from different parts of the city.  Raquel had already taken 4 different taxis and walked through 4 blockades to get from her town of Zaachila (about 25 minutes outside of the opposite side of the city), and Jaime and Julianid had driven across the city to this side of the city around several blockades themselves.  But, when I talked to them on the phone they were unable to get to me, so I would need to drive separately.

Now, we knew that there was possibly another blockade about 10 minutes before arriving at the women’s prison and indeed both cars arrived at the blockade at about the same time.  At that moment, the pastor who leads the women’s prison ministry, called me on my cell to ask where we were.  I explained that we had arrived at the blockade and didn’t know if we were going to make it.  He told me they were at the entrance of the prison waiting for us and that God would make a way through, just as he parted the Red Sea, God would open up a way for us, and he began to pray, until our line cut out.

During that time, Raquel and Julianid were asking others about a way around and nobody seemed to know, but then we noticed some cars go off the main highway onto a dirt road, so we decided to follow them.  Well, it was similar to the earlier morning route, very narrow and bumpy dirt roads, even more scraping of branches, but this time there were more cars to follow and more cars coming in the opposite direction assuring us we would make it through and requiring some tricky moves to allow cars to pass by.  Here were some of the sights along the way…

What amazed me as we took these long alternative routes, was that I didn’t see anyone angry or upset; nobody was yelling at anyone, as a matter of fact, people patiently sought to help others find their way through.

We made it to the women’s prison only one hour later than expected!  We parked our cars along the side of the highway where the rest of the team was waiting patiently for us, so happy to see us!  We gave hugs of greeting and then we all got into the pastor’s van, and he drove us through the prison gates to the entrance of the prison, where we left our phones and purses, water bottles and any jewelry, since that wasn’t allowed in.  We went through a vigorous screening, but were able to get most of our things through (except one bundt cake which they mutilated by taking off the forbidden cherries, pineapple and coconut ).  It barely looked edible, but in only a few hours, we all would be enjoying it!

We started our program with about 10 women, but slowly more women wandered in until there were around 40 as we sang a few worship songs and the women who had participated in the Mending the Soul course shared their testimonies of how God had been at work in their lives.  What an awesome opportunity to hear these women’s redemption stories, filled with much pain and much grace.  One woman shared how God had transformed her anger, resentment and pride into a humble acceptance of her sin its consequences.  Just that week she had received 8 year sentence, but because of God’s love in her life she was able to accept it without anger or resentment. (We are told that there are many innocent women in prison and that in order to even get a sentence you need money to pay the judge, so there are several women who have been in prison for 2 years or more just waiting a trial). Another woman started how she woke up that morning with the verse “This is the day that the Lord has made, we will rejoice and be glad in it” and that she shared that verse with her prisonmates and encouraged them that even in this place they can choose joy.  Another shared how God had helped her to forgive and accept her reality as it is, recognizing that if she had never come to the prison she may never have come to know Jesus as she does today.  Each woman who shared was overflowing with thanksgiving toward the pastor and his wife, as well as the four facilitators of the course.  The last woman shared with tears in her eyes that her 30 year sentence had been put into question and would go to a retrial and that she had hope that God would help to reveal the truth that she is innocent.

After their testimonies I shared a short devotional on God’s great love for us shown in the gift of his Son Jesus Christ, and then we continued with the Lord’s Supper.  Some of them had not celebrated communion in years and there were very few dry eyes during the sharing of the bread and the wine and the hugs afterward.  We ended by handing out their diplomas and sharing tamales with chicken and mole sauce, champurrado (a chocolate hot corn drink) and the mutilated cake.   Another amazing proof of Christ’s love was in one of the facilitators Elizabeth and her 90 year old mother who woke up at 3am that morning to make the tamales for this celebration!

During the time of hugs, I met one young woman from Monterrey, her daughter Dayla (the prisoners are allowed to have their children live with them in prison until they turn 3) and her mother (who was visiting her).  I found out that it was her daughter’s first birthday tomorrow, and I had seen that one of the inmates was selling these adorable little Mickey Mouse purses that she had made (many of the women make different crafts to sell outside, since they need money for things like toothpaste and other personal items).  I bought two purses, one to give to Dayla for her birthday and one to take home for Maya, a beautiful reminder to pray for these women and their families.

The boys at school!

Suddenly, I realized I had no idea what time it was, and I had to pick up the boys from school!  There was no clock in the room and so I started asking if anyone had a watch.  We finally found out it was 2:45pm.  The boys get out of school at 3pm!  There was no way I was going to make it in time to pick them up and so I had to leave abruptly to call the school and be on my way.

So much was on my mind as I started the drive back to the city, taking much longer than normal because I had to go around the blockade once again.  But, again, I was so thankful for people to follow as we went a different way around that was not quite as thorny nor as long.  The principal had taken the boys to her house near the school, and I was feeling bad about being such a horrible mom and putting the principal and her family out, but instead when I arrived I heard about how they had eaten ice cream and played with their cats!

By 4pm we were on our way home, and thankfully the drive took the normal 20 minutes since the blockades had been lifted and traffic in the city had returned to normal.  I arrived home, filled with many different emotions: gratitude for all the love I had experienced personally and witnessed among so many different people throughout the day, admiration for the strength, courage and joy I witnessed in each of the inmates and at the same time anger and sorrow over such injustice and inhumane conditions, and exhaustion from the stress and worry during most of the driving.

I wish I could have recorded the women’s testimonies or taken some pictures in the prison, but they do not allow cameras in the prison.  Hopefully, soon I can share a picture of the amazing women facilitators from our women’s group who faithfully visited the prison and shared their lives with the inmates, encouraging them with their own stories of healing and God’s grace in their lives.  May God lead and guide us as we discern how we may continue to visit the women in prison.  And may God continue the work He has begun in each of them and us and perfect it in each of us until the day of his coming.

2 thoughts on “An unforgettable day filled with God’s love, blockades and a visit to the women’s prison”