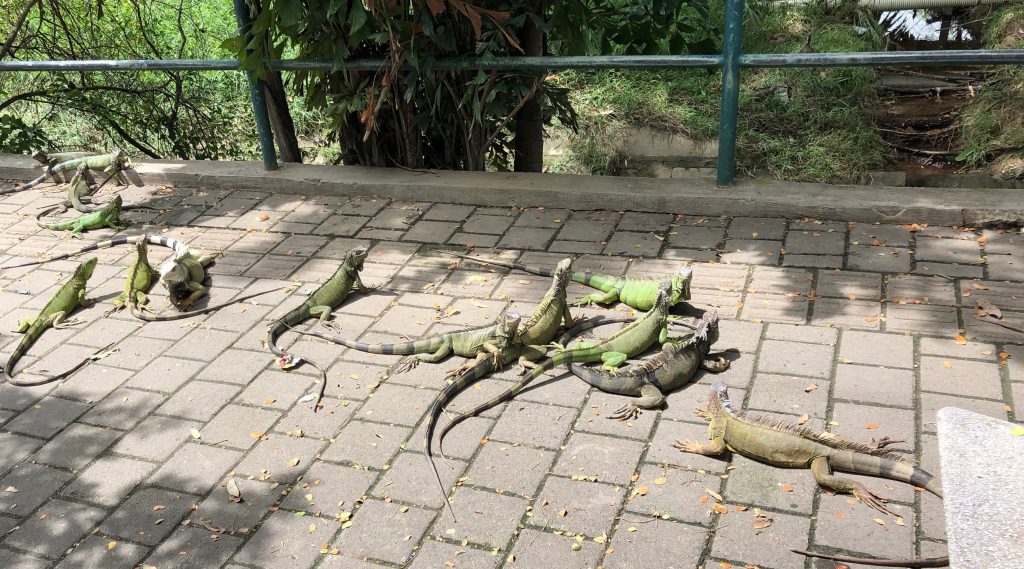 We’re not sure why these Iguanas were in the middle of the sidewalk in front of the Bone Fracture Clinic of Monteria. As we got off the bus to walk to our host’s house, this is what we saw (and these are actually small Iguanas). We’re not sure what you may think of Iguanas, if you are afraid of them, if they make you cringe or freak you out. These Iguanas on this hot afternoon in Monteria appeared to be just a part of the area. No one around us appeared alarmed. No one around the Iguanas seemed to mind them at all. They walked around them, so they wouldn’t step on them (probably a good idea) as they moved along the sidewalk.

These Iguanas appeared to be displaced. Often, they are seen around the city, but usually they are in greener areas, like along the Sinu River Park in the downtown area of Monteria (where there are also monkeys and sloths in this park). But, here they were, these Iguanas, seemingly looking for something better than a hot sidewalk.

We do a lot of moving around in our ministry – we move around Medellin and around Colombia. In every city where we travel to, we don’t wait for people to come to us, we try to meet people and accompany them on their turf, where they’re at. As we move around, we notice displaced people. Colombia is the #2 country in the world with Internally Displaced People (IDP). This is because of the long civil conflict that Colombia has suffered through and experienced, thus forcing people to change location. The Colombia Covenant ministers through churches and social ministries in the largest IDP neighborhoods in the country. The Colombia Covenant in each neighborhood where it is located also addresses those who are experiencing displacement – either forced or voluntary, serving them as they can.

At the present time, Colombia is receiving displaced Venezuelans, who are refugees because they have left their home country. Virtually everywhere we have traveled in the past two years, we have encountered Venezuelans. There are various ways that one can respond and react to this current reality. The Colombia Covenant is looking for ways to serve this new population that is growing amongst them—including them in their church ministries, schools, and social outreach ministries. No one wants to see anyone wandering around on a hot sidewalk. Colombia, as a country, and the Pacto as a group of churches and ministries, is not giving up on reaching out to, and serving in new and creative ways, the displaced populations.

Thank you for your prayers with us and interaction as we accompany the Pacto and Colombia on this path.