Today if you Hear his Voice 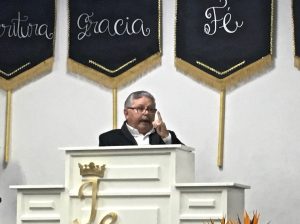 The Pacto of Colombia’s 50th Anniversary celebration got off to a rousing start, thanks to Fabio Acevedo’s Friday night opening service sermon on “Hearing God’s Voice”. Fabio is one of the oldest pastors in the Pacto in Colombia and is often sought out for his pastoral insight, experience, and example of pastoral ministry. On this night, his sermon hit home for many of the pastors in attendance from around the Pacto in Colombia. Fabio shared with us a glimpse into the history of the Pacto in Colombia by saying that history shows that there were times when the Pacto didn’t hear God’s voice that well and that it was easy to act out of a hardened heart, instead of acting as God’s children, in his image and likeness. He shared of the power of encouraging others, exhorting others, being merciful and not being judgmental and insulting.

Since returning in mid-October to Colombia and entering into ministry once again, these words of God, spoken through Pastor Fabio, have been a part of gatherings and meetings and ministry that we have participated in and accompanied in four of the five regional conferences with different members of the leadership. The proof of the power of Fabio’s sharing on this “opening night” has been the number of times that God’s Word shared through Fabio has been referred to in these conversations and gatherings. With all of the anniversary celebration going on and the festive atmosphere, it is such a blessing to know that the Word of God that was preached, was heard and is being applied. What a great testimony of God’s action and participation and leading of the Pacto as it goes forward toward the next 50 years. May we continue to “hear his voice” and apply it in each and every situation.