Shout Out to Cila and Gabriel

We want to give a “shout out” to Cila and Gabriel! 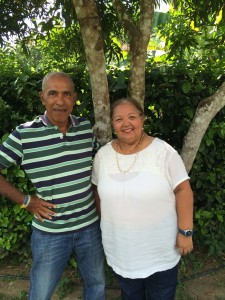 Gary met Cila and Gabriel Barrera in 1991, on his first trip to the city of Monteria. They had opened their home to a home group Bible study, that grew to be the Central Covenant Church of Monteria. From the first time of meeting of this dear couple, we had made friends for life. They have welcomed us into their home numerous times over these years. We know them to have hearts that are deep and wide and high. We have even stayed in their home when they aren’t there—because they made sure that someone was there to receive us. Mary Lou and Gary are just two of many, many, many people who have passed through their home and received exquisite meals, a welcome rest, space to meet with others, and a warmth of heart that never ceases to amaze.

Three weeks ago, Mary Lou and Gary were meeting with the South Coast regional conference pastoral couples and leadership and, of course, spent the evenings at Cila and Gabriel’s home. When we got to the house, however, we were surprised to find three young women staying there. These young women, who lived near the Barreras ranch in the remote countryside, were beginning their post-high school studies. They were not able to find a place to stay before the beginning of their classes and so the Barreras asked them to stay at their home until other housing was found. We were surprised to find the girls in the house because the Barrera hospitality never stops.

Many times we have found ourselves meeting new people at the Barrera home. When their son, Pablo, was little, he would walk by a little boy on the way to school. This boy appeared to be alone and without a home. He asked his parents if they could give a room in their house for him. So, the Barreras took the boy in until he graduated from high school and Pablo had another “brother” living with him. Actually, the Barreras housed another boy Pablo’s age during this time as well. The Barreras helped one of their domestic workers to purchase a house where she could live with all of her family. Gabriel’s mother lived with them for almost two years until she reached 100 years of age and soon after, passed away. They have hosted mission teams that we have brought to Monteria, family and other people who are passing through Monteria on their way to somewhere else, and countless, countless others.

It is very challenging to reimburse the Barreras for their hospitality. We have tried various ways to pay the Barreras back, and each time it is almost impossible. They just do not expect it nor want it. The writer of Hebrews talks about being hospitable to strangers, because you might be unaware that you are hosting an angel (Hebrews 13:2). The Barreras treat their guests as angels, although many of us are not in that category, because the Barreras live out the truth, “it is more blessed to give than to receive” (Acts 20:35). The real angels, without a doubt, are Cila and Gabriel Barrera.