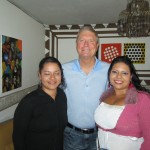 In the first four months of this year a common theme is emerging – The need for the Positive Christian Male Influence. It has emerged in different occasions and situations in the past, but in 2013 has come to the forefront. The first mission/work team that we hosted, a lay counseling team from First Covenant Church of Sacramento, CA, was predominately a female team (with eight women and one man). Yet, its one male member provided one of the most poignant moments of ministry during a gathering with the Valuable Women in the Hands of Jesus outreach ministry. The meeting had transitioned into a time of prayer in which one woman accepted Christ as her Savior. Leidy was welcomed into the family of God and received an important and powerful “hug from the Father” from the lone male member of the team. Leidy and her sister had suffered from very negative male influences in their lives (one of the reasons that Leidy had never given Jesus a chance). A story that is way too common.

Two weeks later, at the Colombia Covenant Annual Meeting, the new president of the Covenant Church Federation – FIPEC, and the out going president, both spoke to their fellow pastors and male leaders, encouraging them to truly be the man God had created them to be – as husbands, as fathers and as male pastors. The encouragement was to identify and break away from any negative influences that had been received as children or young men. Being better men, husbands, and/or fathers, they could be better pastors and leaders in the Church and ministries and thus work toward healing a “big hurt” in the world.

In March we hosted an “exploration and vision” trip for the seminary course being taught in 2014, coordinated by North Park Theological Seminary, on the theme of Human Trafficking. Men are major players in this worldwide sin. Men will play a big role as the theme is addressed here in Colombia as they take a look at their own lives and perspectives. It will take men breaking away from stereotypes, tradition and apathy who are willing to stand up and act with integrity and authenticity, becoming whom God has created them to be. This will take some work as a true profile (valid in 2013 and beyond) is established of the man of God, based on true interpretation of God’s word, overcoming culture, society and ignorance.

The Stockton (CA) Covenant Church mission/work team spent five days working with the English classes at the Covenant Elementary School in Medellin. Four of the seven male members of the team were high school students. It is not often that we host so many high school students but, in this case, the four high school youth played a major role – that of positive Christian male role models for the children at the school. The barrio where the school is 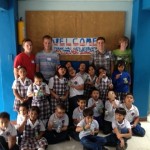 located is full of negative male role models – heavy gang presence, delinquency – a microcosm of the current problems facing Medellin in its barrios. Teaching the English language gave these youth the opportunity to portray an integrity and authenticity of life that isn’t seen very much on the streets in Medellin. Also, Pastor Bud Locke, a member of the team, was able to address the Evangelical Ministers Association of Medellin on a similar theme, encouraging the members of the association to not let their past experience with male influences in their lives determine their current and future path in life and in ministry. This theme went along with the Ministers Association 2013 emphasis on “the authentic fatherhood of God”.

We are looking forward to accompany God as he develops this theme throughout this year. At the end of April a mission/work team from Chandler, AZ will include a seminar on the “Mending the Soul” ministry as a part of the Advocacy for Victims of Abuse AVA ministry of the Covenant in Colombia. In November our mission/work team calendar has two possible teams. Each one of these teams will be made up of men. One of the emphases for these two teams is on helping the Covenant of Colombia in developing a strong men’s ministry. The Covenant of Colombia is not trying to “highlight” men and male pastors, etc. Instead, it is trying to accompany God in addressing a worldwide need of the human race – for each man to come to know, portray and live out a true image of God in all aspects of his life.