RAIN AND SOCCER…and then God Speaks!

RAIN AND SOCCER….and then GOD speaks!  Both my kids love soccer.  My husband was a baseball guy and I was all about basketball.  So when our daughter was strongly influenced at a young age by some teenagers we knew, toward soccer…we went with the flow.  In Oklahoma sometimes it was hot when she played, but overall…we really enjoyed it.  And then we moved to Chicago!  Soccer when it is above 50 is a special treat.  We invested in everything North face and have huddled through snow, rain and wind.   On Tuesday I had a God moment.  We were watching all these kids playing in the cold rain.  It was windy, the rain was chilly, and the sky was gray.  Kelsey had a game that just couldn’t be rescheduled.  So the 22 girls on the field had to dig deep and play hard.  At the beginning these 13 year old girls were slowly adjusting to being warm and dry to soaked to the bone and cold.  Water started to pool a little on the turf and the play area was slick.  About 8 minutes into the game was when a difference occurred, a HUGE difference could be seen.  All of a sudden each individual player made a choice.  They chose to embrace the storm or to bow down to it.  One girl in particular huddled in her thin jacket shivering with teeth chatting…not running or moving; lets call her Sarah.  Another girl on the same team decided it was fun, an adventure, a challenge… and embracing the rain and wind with a smile on her face…she laughed, ran, passed, cut, and overall enjoyed herself; lets call her Mary.  Her joy was contagious as water from a pass would splash in a team mates face, to which both girls would laugh and charge after the ball again.  Pretty soon Mary had at least 4 players on her team and 2 on the other team embracing the challenge and laughing at the adversity.  Mary approached Sarah with laughter and tried to get her to participate.  “Run, it will keep you warmer…come on Sarah…it’s fun”.  Throughout the game many players subbed out due to lack of performance and many players played the entire game and came off the fields beaming.

SO WHAT DID GOD SAY?

IT IS UP TO YOU IF YOU CHOOSE TO HUDDLE UP AND BE MISERABLE IN THE STORM OR IF YOU EMBRACE THE CHALLENGE ?  KEEP RUNNING, KEEP LAUGHING, AND ENCOURAGE OTHERS TO JOIN YOU! 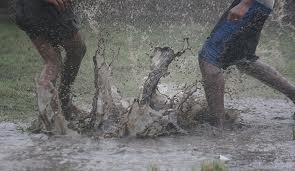