Posted by Jenifer DeCastro on September 26, 2011 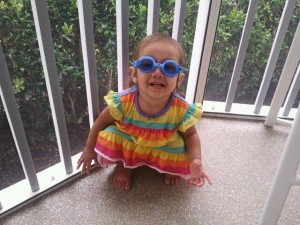 My 20 month old daughter Grace loves the word AWESOME!  If I hand her a snack she says “AWESOME”, if she sees a bird she says “AWESOME”, even randomly walking she will just say “AWESOME”.  The definition for awesome is: Extremely good; excellent.  Synonyms: amazing,  astounding, marvelous, fabulous, miraculous,  staggering, stunning, surprising, wonderful.  The word she has chosen to use the most holds so much meaning for exactly where she is in her life right now.  Almost two years old and the world is full of amazing, astounding, surprising moments, moments that are AWESOME!

I think today I have said AWESOME as many times as Gracie!  Just this last week I have been able to get the word out that I have been approved to be a domestic missionary.  The fact that I get to work from home and organize, facilitate, and participate in mission trips all over the United States that will be helping thousands of people on a yearly basis, is just AWESOME!  My first donation was for $3400.00.  AWESOME!  My second donation was a pledge for $100.00 a month for the duration of my ministry.  AWESOME!  The third was public support by a friend on Facebook who posted my blog and said great things about me.  AWESOME!   The trips in 2012 are going to be AWESOME! Can I tell you all how excited I am!  It is staggering, stunning, wonderful, and EXTREMELY GOOD.  In other words, AWESOME!