Thirteen years later and a few illustrious visitors in Florida 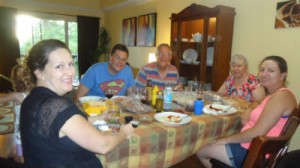 It was in 2000 that I met Armando and Dinha in Toronto, Canada.

Four years later, I moved to Canada and stayed in their home in Mississauga for almost 6 months. At that time I met their son Marcio and his wife Karina. And also I met their first child, Julia. She had just been born. Throughout the years, msn, facebook, skype and other technological networking tools allowed us to keep in touch…

At our wedding, Johnna had the privilege to meet Armando and Dinha in Chicago and I had the pleasure and joy to see them again after almost 10 years. Johnna and I had the chance to see them in Toronto last November. At that time, Johnna met Marcio, Karina, Julia, Isabella (the new little additional to the family), Tiago (Armando’s youngest son), Glaucia (Tiago’s wife) and their daughters as well…

A couple of months ago, Marcio, Karina, Isabella and Julia came to Florida on vacation and stayed with us. The whole family (except Tiago, his wife and their kids) came to visit us and met Sophia last month – thirteen years after our first meeting in Toronto!

In 2000, I also met another friend named Simon. I thought I would never see him again. Simon is 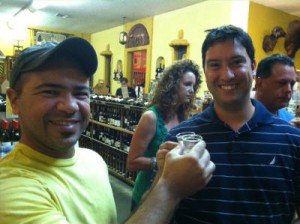 from Switzerland. I remember on his last day in Toronto we went to see the movie “Gladiator” and he gave me “Toblerone” which is Swiss chocolate, as a souvenir before he flew back to Switzerland.

I could never imagine that in 2005, I would be in Switzerland traveling with him, meeting his family at their nice home in the mountains, taking trains to the Alps… And then surprisingly, he took me to the real “Toblerone” mountain in the beautiful place called Zermatt.

What a long and unexpected journey from Canada to Zermatt!

After our Swiss season I saw Simon 3 more times – in Amsterdam, in Barcelona and once again in Barcelona for our engagement party just before I moved to the United States.

Last month Simon and his fiancée, Joelle, were on vacation in Florida and came to visit us and meet Sophia.

What are the chances??!!

The same week on vacation in Florida.

I do not know how it happens. Nevertheless, the only thing that I know is I have learned to enjoy friendships and live every single day in life like it was my last day. I believe when we do it, our food has

more taste, our water quenches more of our thirst, and our day has more sunshine even though it may be raining outside.  We realize that life is about people: a living interaction, human encounters, divine appointments, unexpected and surprising situations.

This “boomerang of encounters” in life reminds me of another friend of mine – Gustavo. I met Gustavo in Sao Paulo, Brazil about 15 years ago. We worked together. We studied Italian together and after that we went separate ways and chose different destinations. As I flew to Canada and Spain, he flew to Italy and England. For a while (probably for 3 or 4 years) we tried to plan to have pizza together. The only problem was that the oceans and continents were separating us from meeting again.

Finally, in 2006, we were able to meet each other at Greenwich Park in England. At that time, he told me something that I have not forgotten…

“Fabio, there are two types of friendships – the comet friends and the star friends. The comet friends pass by your life intensively, but very fast and shallow – they may leave some marks, impressions and influence you a little. They go away as time goes by. You may not remember them very well in the future. However, the star friends are like stars. They do not move. They do not go anywhere. They are always there. They are always present even though you might not see them every day – like when the sky isn’t clear. Some nights are not as good as others for seeing stars. The star friends are like them. They are there. They are present. You can count on them anytime. Time goes by, but they do not go away. When you see them again it is like you have been seeing them every day.”

Last month, once again life surprised me reminding me that people are always more important than any project and friends are the most important patrimony that we carry in life especially those who are “star friends”…

This entry was posted in Diary, Let's talk and tagged Diary, Reflection. Bookmark the permalink.